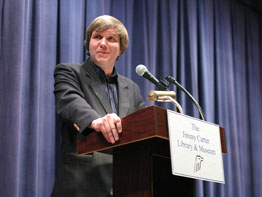 ATLANTA – As a young Jesuit, Father John Dear chose to add his own vow of nonviolence to his order’s required vows of obedience, poverty and chastity.

The vows still guide his life more than 25 years later, but after the initial thrill of making his public commitment to them he learned the hard work had only just begun.

“The vows are the beginning of the journey,” he said. “I didn’t know that. I thought it was the end. I have to keep experimenting.”

A life of “peace, love and nonviolence is a journey. There is no reaching perfection,” he said during a Nov. 19 lecture at the Jimmy Carter Library and Museum in Atlanta.

His appearance was part of a nationwide book tour for his autobiography, “A Persistent Peace: One Man’s Struggle for a Nonviolent World,” which has sold 14,000 copies since it was published in August.

Father Dear, recently nominated for the 2008 Nobel Peace Prize, said people need “to see life as a journey, every day mindfully, one step at a time, living and breathing in the Holy Spirit of peace and walking the road to a new future of peace and the God of peace.”

The priest described people in the peace movement as the “new abolitionists,” imitating people who held firm to their beliefs as they opposed slavery. Even though they were told slavery is in the Bible and that it had always been around for generations, they persisted in fighting for change.

“They were faithful to the journey. They never gave up,” he said.

Father Dear, 49, knows what that is like. He has been arrested more than 75 times for war protests, including hammering on an F-15 fighter jet. He organized chaplains in New York after the 9/11 terrorist attacks, urged National Guard soldiers not to go to war, and sat in sackcloth and ashes in the biblical tradition of repentance to protest nuclear bombs.

He has visited war zones throughout the world, including El Salvador, Guatemala, Nicaragua, Haiti, the Middle East, the Philippines, Northern Ireland and Iraq.

“War is not the will of God. War is not blessed. War is never justified,” the priest said.

He told the Atlanta audience that a spiritual pilgrimage he made to the Holy Land in 1982 changed his life. The priest arrived just as war erupted between Lebanon and Israel and he witnessed fighter planes flying over the Sea of Galilee to drop bombs.

“I made my decision that I was going to spend my life trying to practice and teach the Sermon on the Mount,” he said.

Father Dear has held leadership positions with the Fellowship of Reconciliation and Pax Christi. He has written and edited more than two dozen books on peace and justice. He currently lives in New Mexico, where he directs retreats, gives lectures and leads protests.

During an October lecture at St. Catherine of Siena Church in Burlingame, Calif., the priest said he is under continued government surveillance because of his protest actions. He said he no longer has the right to vote; he was convicted of two felonies in the early 1990s for destruction of government property and conspiracy.

The priest told the church audience that his life continues to be a “journey toward peace.”

“After all these years of working, the journey to peace is still the most important thing, greater than any one event or success,” he added.

And even though he remains committed to peace, the priest said he tries to avoid the word “pacifism.”

“Pacifism connotes passivity,” Father Dear said. “Nonviolence involves active derring-do, confronting the opponent nonviolently. Peace is not just a tactic or a strategy. It’s a whole new way of life. Jesus didn’t say, ‘Blessed are those who like peace.’ He said, ‘Blessed are the peacemakers.’ ”