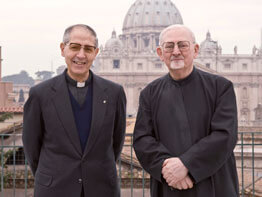 ROME – The obedience, affection and common mission binding the Society of Jesus to the pope are solid, unchanging and the reason why differences can be so painful, said the new superior general of the Jesuits.

Father Adolfo Nicolas, elected Jan. 19 to head the world’s largest Catholic men’s order, told reporters, “The Society of Jesus has always been, from the beginning, and always will be in communion with the Holy Father, and we are happy to be so.”

Meeting journalists Jan. 25, he said, “If there are difficulties, it is precisely because we are so close.”

Like a married couple, he said, the Jesuits and the pope are bound to one another and committed to working together for the good of the church and the world.

“Only those who love each other can hurt each other,” he said.

From time to time difficulties arise, “but this is normal,” he said.

“The Society of Jesus wants to cooperate with the Vatican and obey the Holy Father. This has not and will not change. We were born in this context, and this is the context that will determine our decisions,” the superior said.

Father Nicolas said that since his election, he had been reading the newspapers more than usual and has found some of the comments about his election entertaining, some absolutely false and others right on the mark.

He said a Spanish newspaper had been looking for his report card from a school he attended only one year at the age of 10.

“It’s terrible, that year I failed two subjects – geography and another that I don’t remember,” he said.

Other newspapers, he said, have tried to imply that there is “a theological distance between me and (Pope) Benedict XVI,” when, in fact, Father Nicolas’ theological studies included the then-Father Joseph Ratzinger’s textbooks, which “were very interesting and had a newness and an inspiration that all of us recognized.”

“The distance is a theory in the imagination of those who have written it,” the superior general said.

He also said he had read several articles comparing him to Father Pedro Arrupe, who led the Jesuits 1965-83, and Father Peter-Hans Kolvenbach, his immediate predecessor.

“However, no one has yet said I’m 10 percent Elvis Presley, although one could say this and it wouldn’t surprise me. But I think this is all false,” he added.

The Spain-born Father Nicolas said that what is true is that he has been deeply changed and influenced by the 40 years he spent working in Asia, particularly in Japan.

“In Japan I discovered that the world wasn’t what I thought it was in Spain,” he said. “Their way of seeing things, even of seeing the faith, questions about various problems, is not like ours.”

Father Nicolas said that studying theology in Japan in the 1960s was “like trying to refind, reformulate your faith not only in the context of the Second Vatican Council, but in the context of Asia, of Japan where Buddhism and Shintoism and other religions have had a huge influence.”

Father Nicolas said it also taught him “to smile in the face of difficulties and human imperfections.”

“In Spain, I was a bit intolerant, a bit in the line of ‘everything in order,’ demanding, because for me religion was still understood in the widespread way of fidelity to a series of religious practices,” he said.

“It scandalizes the Japanese that we are so strict, intolerant, so unaccepting of diversity,” the Jesuit said.

The new general did not answer questions from the press because, he said, he will take his orders from the decisions of the General Congregation, which will continue to work at least until the end of February.

“What is important for me now is to listen to what the General Congregation wants, how we will respond to the conversation and challenges the Holy Father addressed to us and which we are taking very seriously in our reflections, how to respond to help the church, not ourselves,” he said.

In a letter to the General Congregation before Father Nicolas was elected, Pope Benedict praised the Jesuits for their great contributions to evangelization, but also urged them to reaffirm their fidelity to contested points of church doctrine, including in the area of interreligious dialogue and sexual morality.

Father Nicolas said he hoped the Jesuits would follow the principles of Mohandas Gandhi, “who said that when you speak of something you must first ask, ‘Is it true?’ because if it is not true, then it is not interesting. Second, ‘Is it gentle, charitable, kind?’ and third, ‘Is it good for others?’”