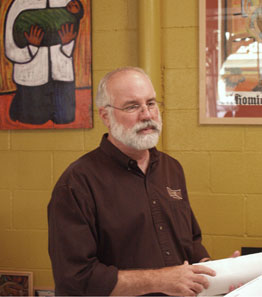 WASHINGTON – A priest known to former gang members in East Los Angeles as “G-Dog” was among five adults and six young people honored by the Washington-based Caring Institute as the most caring people in America for 2007.

Jesuit Father Gregory Boyle, who founded Homeboy Industries in 1988 to provide “hope, not jail” for former gang members who want to turn their lives around, received one of the 2007 National Caring Awards at a Nov. 16 ceremony in Washington.

As chairman of the institute’s board of trustees, former U.S. Sen. Robert J. Dole of Kansas, who was a Republican presidential candidate in 1996, described the 2007 winners as “wonderful role models and the very personification of caring.”

Father Boyle’s programs help an estimated 1,000 young people from nearly 600 different gangs each month. Beginning with a jobs program and a bakery, Homeboy Industries now includes a cafe as well as businesses that offer silk-screening and home maintenance services and sell merchandise with the Homeboy logo.

Other adult recipients of the 2007 Caring Awards were: Constantin Asavoaie, director of Prison Fellowship Romania, who spent 10 years in prison because of his Christian faith; Dominic Avellani, founder of the East Boston Adult Education Center, which has assisted more than 40,000 immigrants, refugees and high school dropouts; Rose Espinoza of La Habra, Calif., who started a tutoring program for low-income children that now serves 200 children at four branches; and Karin Walser, founder and executive director of Horton’s Kids, a nonprofit tutoring and mentoring program in the southeast section of Washington.

Youth winners of the Caring Awards were:

– Jourdan Urbach, a 15-year-old violin virtuoso from Roslyn Heights, N.Y., who has raised more than $1.3 million for pediatric units and medical charities.

– Mollie and Jackie Singer, 18-year-old twins from Las Vegas who started Diabetic Angels to educate children about diabetes and teach them how to watch out for their diabetic friends.

– Davin Singleton, 18, of Pasadena, Md., who created a workshop called “Dreamers: How to Become Your Dream” to empower dyslexics like himself and other children.

– Lauren Beeder of Newbury Park, Calif., a 16-year-old volunteer at Children’s Hospital of Los Angeles who founded kidsCANCERvive to raise funds for research and provide online support to children with cancer and their families.

– Emily Wemhoff, 18, of Creston, Neb., founder of Project SAFE, or Save a Friend Everyday, whose fire safety efforts have saved countless lives in Nebraska.

The Caring Institute was founded in 1985 by Val J. Halamandaris after he met with Mother Teresa of Calcutta. She suggested he confront the poverty of the spirit in the developed world by identifying extraordinarily gifted people and holding them up as role models.

Each of the Caring Award winners is inducted into the Hall of Fame for Caring Americans, located in what was the first Washington home of human rights advocate Frederick Douglass.