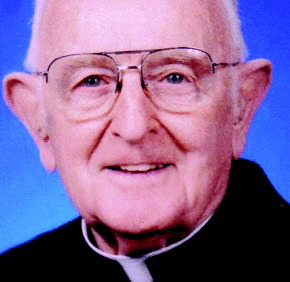 A funeral Mass for Jesuit Father William K. McGroarty was offered Nov. 30 at St. Alphonsus Rodriguez in Woodstock. Father McGroarty, the oldest member of the Maryland Province of Jesuits, died Nov. 26. He had been a Jesuit for 66 years and a priest for 57 years. He was 93.

Father McGroarty attended St. Charles College in Baltimore, served in the U.S. Army during World War II and was ordained to the priesthood in 1955 by the 11th Archbishop of Baltimore, Francis P. Keough.

While in residence at Loyola University Maryland in Baltimore, Father McGroarty was assistant province treasurer of Jesuit properties in southern Maryland and retreat director from 1988 to 2003.

Still at Loyola, Father McGroarty provided retreat ministry, spiritual direction and counseled alcoholics until 2011. He then went to Colombiere Jesuit Community in Baltimore where he served as a pastoral minister until his death.

Father McGroarty began his priestly ministry in 1957 as dean of students at Wheeling Jesuit University in W.Va. where he served until 1970.

Father McGroarty earned two bachelor’s degrees, a licentiate in philosophy and a master’s degree, all from Woodstock College in Woodstock. He earned a certificate in alcoholic counseling from the Johns Hopkins University School of Public Health in Baltimore.