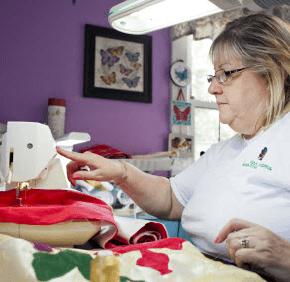 By Maria Wiering
mwiering@CatholicReview.org
Twitter: @ReviewWiering
LINTHICUM – The pleats. The ruffles. The embroidery.
The perfection.
These are not your mother’s home-sewn items – unless your mother is Kathy Furth.
Furth, a 54-year-old parishioner of St. Lawrence Martyr in Jessup, owns and operates her sewing business, Sew Many Seams, from her home in Linthicum. Most of her commissions are liturgical linens and vestments, but she also does formal wear and other special occasion clothing. Her closets brim with clothing she’s sewn for family members, including coordinating Christmas outfits her five grandchildren wore last year.
Furth’s work keeps her busy – often requiring more hours than what one considers “full time,” she said – but when a friend asked her to join a daylong sewing effort to help Hurricane Sandy victims last fall, she didn’t hesitate. Instead, she packed her sewing machine and drove to New Jersey.
The event was fun and fruitful, and it inspired Furth to organize a similar sewing day to benefit Moore, Okla., tornado victims. More than 40 people participated in the June 8 event at St. Lawrence’s parish center, from other seamstresses to people who donated funds and prepared food. Their work yielded more than 200 handmade items, mostly durable, wash-and-wear children’s clothing. Almost everything had pockets –places for kids to put the scattered pieces of their lives, Furth said.
Furth mailed 10 boxes of clothes to St. Andrew the Apostle, Moore’s only Catholic church. Parishioners were amazed – both by the charitable effort and the clothing’s quality, said Caryl Prati, St. Andrew’s parish nurse who coordinated the clothing distribution.
“I’ll never forget the Saturday I got those clothes – I was absolutely blown away by what I saw,” she said. “They were so well done.”
The tornado victims were touched by the clothing’s personal quality, such as a message of hope attached to each garment, Prati said.
“It was a very Christ-thing,” she said.
Vacationing along the East Coast in August, Prati, 72, and her husband, Don, traveled to Jessup to meet Furth, her husband, Steve, and a handful of other sewing event volunteers. Prati left Maryland with another bag of handmade clothes.
The disaster-related sewing outreaches compelled Furth to organize Sew Hopeful, a ministry of St. Lawrence, to provide handmade newborn clothing to the Gabriel Network, a regional pro-life organization that supports women in crisis pregnancy situations. Sew Hopeful plans to host its first quarterly sewing day Oct. 19.
Jim Sharbaugh, director of volunteer programs for the Gabriel Network, said handmade clothing will be an affirming gift for the mothers they help.
“Most of the women who come to us are low income,” he said. “They’re very afraid. They’re feeling very isolated. They can barely make it day-to-day. To have this wonderful clothing item that would be otherwise out of reach for them – psychologically, that’s a very powerful thing. It makes their pregnancy, their child and their experience just as beautiful as someone else’s.”
As a member of the Smocking Arts Guild of America’s Crofton chapter, Furth participates in its service project, providing “Wee Care” bereavement gowns to local hospitals for infants who die during or shortly after birth.
Furth expects sewing for the Gabriel Network will be a hopeful way to counterbalance the tragedy inherent in the other outreach, she said. It also meets a regular need, rather than one created by an unexpected event.
“The ladies who were involved want to keep doing the sewing, but you can’t just keep sewing for a disaster that hasn’t happened. That loses its point,” she said. “I’m looking forward to making clothes for the new babies going home from the hospital.”
Also see:
Baltimore Catholics construct wooden casing fit for a saint
PrevNext