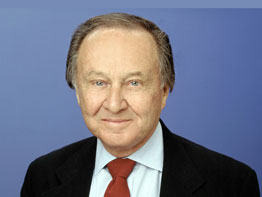 Some of the institutions that helped shape the man who delivered one of the most distinctive catch phrases ever spoken on television were paid back in full.

James K. McManus – better known by his broadcasting name, Jim McKay – neatly distilled the drama that has spawned a billion-dollar industry when he spoke of “the thrill of victory and the agony of defeat” on ABC’s “Wide World of Sports” in the early 1960s.

Airwaves and the Internet have been awash in tributes to the man who won 12 Emmys and covered as many Olympic Games, noting his elegance and grace under pressure – most notably in 1972 from Munich, Germany, where he poignantly narrated the end for 11 slain Israeli athletes.

His place in the broadcasting pantheon and dedication to Maryland’s horseracing industry have been noted, most recently June 10 at the Cathedral of Mary Our Queen, Homeland, where a funeral Mass was celebrated by Monsignor Nicholas P. Amato, Mr. McManus’ pastor at Our Lady of Grace, Parkton.

“He was to sport,” said Jackie Stewart, a world champion race car driver from Scotland who became an ABC colleague, “what Walter Cronkite was to news in your country.”

Sean McManus, the president of CBS News and Sports, welcomed friends of his father before several moving testimonies, including one by CBS sports anchor Jim Nantz.

The life and career of the elder Mr. McManus were shaped by the Jesuit influence.

Born in Philadelphia, Mr. McManus moved to Baltimore at age 15 and graduated in 1939 from the high school known now as Loyola Blakefield, Towson.

He earned a Bachelor of Arts from Loyola College in 1943, took a reporter’s job at The Evening Sun, and would credit his alma mater’s Dramatics Club for enabling him to be the first person seen and heard on television in Baltimore in 1947.

He never forgot that launching pad.

“Sometimes, sending a check is the easiest thing for a benefactor to do,” said Michael Goff, Loyola College’s vice president for development and college relations. “Jim and his wife, Margaret, were not only longtime members of our John Early Society, they became the chair couple.

Margaret Dempsey McManus was a pioneer in her own right, graduating from the College of Notre Dame of Maryland and taking a reporter’s job at The Sun when a woman in a newsroom was rare.

She and her husband of 58 years were honored by Notre Dame in 1986, with its Pro Urbe (For the City) Award. Mrs. McManus had established a day care center at Notre Dame, and they were a constant presence at Evergreen and throughout the archdiocese.

“Jim and Margaret were people of real, genuine faith,” said Cardinal William H. Keeler, archbishop emeritus of Baltimore, who presided at the funeral. “Jim provided the voice for a video the archdiocese produced after the pope’s (1995) visit. I cannot say enough good things about him.”

Mr. Nantz traveled to the 2000 British Open in Scotland for Mr. McManus’ final appearance on rival network ABC, and left with an appreciation for his love of family.

“He was bursting with pride, speaking about Sean and Mary (a daughter),” Mr. Nantz said. “He longed to be home. With tears in his eyes, he talked about Margaret. He no longer had the appetite for being the lonely road warrior.”

Mr. Stewart, the race car driver, made a spur of the moment visit last week to the McManus farm, where Monsignor Amato was a frequent visitor.

“Before giving him Holy Communion, his face would light up and he’d start with a story,” Monsignor Amato said. “Sometimes, I must confess there was more excitement in telling the story than the story. How wonderful is that.”

Earlier, Monsignor Amato remarked, “Someone said of Jim, ‘I can show you a picture of roses, but Jim could make you smell them.’ ”

That command of the language and delivery were on display at Loyola College’s 1981 commencement.

“Jim was the guest speaker, and his topic was the importance of the apt word,” Mr. Goff said. “Everyone settled in for a 20-minute speech, and he delivered the Gettysburg Address, making his point in 6 minutes.”

Mr. McManus was an authentic voice in an industry often based on artifice, as he made audiences of tens of millions feel as if he were speaking with them alone.

His days under the Jesuits began at Loyola Blakefield, where annually a senior is honored with the James K. McManus Award for excellence in journalism or the literary arts.

“In a way,” said Father Thomas A. Pesci, S.J., president of Loyola Blakefield, “he epitomized what I think a Jesuit education hopes to achieve – a modern equivalent of a Renaissance Man. Depth, breadth, learning, leadership, service. That was Jim McKay.”

His humanity was never more apparent than in 1972, when Palestinian terrorists took 11 Israelis hostage at the Olympic Village in Munich. It was Mr. McManus who had to correct erroneous rescue reports with the haunting epitaph, “They’re all gone.”

John M. Stewart, the dean of students at Loyola Blakefield since 1981 and a member of its Class of 1960, saw the Jesuit ideals in Mr. McManus.

“We preach ‘men for others,’ ” Mr. Stewart said. “The compassion, the sympathy that Jim had, you could see that on his face in Munich.”