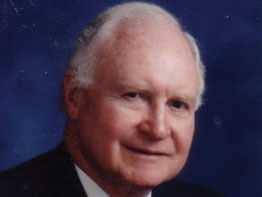 A funeral Mass for James Walter Curran Jr., a longtime board member of The Cathedral Foundation, was offered March 31 at Immaculate Conception, Towson. Mr. Curran Died March 25. He was 77.

Mr. Curran also was the current chairman of the board of the Cathedral Foundation, the publisher of The Catholic Review.

“Jim gave more than a decade of leadership to building up The Catholic Review and the Foundation,” said Daniel Medinger, editor of The Catholic Review. “His dedication helped us truly become an international Catholic communications firm in service of the church. Jim was a holy man who inspired us all to greater service.”

He married his high school sweetheart, Mary Elizabeth “Betty” Curran, in 1952, had six children, 18 grandchildren and one great grandchild. He lived with his wife and family in Riderwood for 43 years. Mr. Curran was lovingly referred to by his wife as a “people person.”

Mr. Curran maintained extremely close friendships with classmates he met as early as his days in nursery school, as well as friends from Loyola and the University of Maryland.

A first lieutenant in the U.S. Air Force stationed in Germany from 1953-55, Mr. Curran worked as an advertising sales executive in both radio and television markets for 25 years. In his mid 50s, Mr. Curran became an investment advisor for Legg Mason and retired from Dean Witter in 1995. In retirement, he sold advertising for Tom Davis Sports Programs. In addition to his career in the advertising industry and investments, Mr. Curran was a life-long entrepreneur, owning several delicatessens and seafood markets in Baltimore, Annapolis and Ocean City.

Mr. Curran was an active member for 39 years in Alcoholics Anonymous and served as past president of the Tuerk House. An enthusiastic Irish-American who was active in the Friendly Sons of St. Patrick and the Hibernian Society, he thoroughly enjoyed the Curran Family’s long tradition of attending the Baltimore St. Patrick’s Day parade each March, never missing one.

He also enjoyed lifelong hobbies including a sustained interest and involvement in local and national politics. He enjoyed reading and amateur photography.

Mr. Curran was athletic throughout his life, playing football and baseball in high school. His interest in high school football was celebrated each year while attending the annual Turkey Bowl between Loyola and Calvert Hall College High School, Towson. He passed down this tradition to his children and grandchildren and shared his enjoyment of the game each year with his brothers, sons and cousins and many alumni from these schools. He loved swimming and body-surfing throughout his life and was an active member of the Towson University Wellness Center, exercising three times per week with other seniors.

He was a golf enthusiast and a member of senior golf groups. Additionally, Mr. Curran loved being a spectator and was an avid Baltimore Orioles, Colts and Ravens fan. He also enjoyed University of Maryland football and basketball.