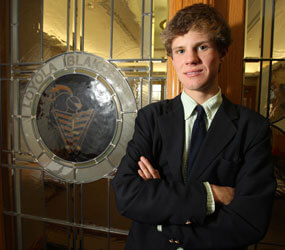 Loyola Blakefield had a solid crew of distance runners in the spring of 2007.

The Dons found an extraordinary one when all of those upperclassmen were bested in the Billy Korrow Memorial 5K, a campus tradition, by an eighth-grader.

Now 17 and a junior at the school, Matt Jablonski has matured into a distinctive athlete. He has the potential to become the best distance runners ever out of the Maryland Interscholastic Athletic Association, but Jablonski wins cross country races as an afterthought, as his priority in the fall is soccer.

Jablonski is a central midfielder for the Dons, who lost in the A Conference semifinals to McDonogh Nov. 3. The next day, Jablonski held off Calvert Hall’s Nick Rowe to win the MIAA cross country championship at Oregon Ridge.

“Playing McDonogh in the playoffs, obviously, that’s a pretty intense game,” he said. “I was pretty sore the next day.”

Jablonski is accustomed to explaining the challenges of his juggling act.

What are the benefits?

“I’ve had to learn how to manage my time,” said Jablonski, a B student. “If I have a test three days from now and know that tonight is my only free night to study, then I’ll get on it.”

At soccer practice, Jablonski was challenged by teammates Elliott Andelman, Nick Krochta and Joe Taylor. In cross country, he was followed by Matt Erford, John Lobo, Brendan Tizard and Hugh Monahan as the Dons won the MIAA title by a single point over Calvert Hall.

Jablonski spends the winter and spring with the latter group, turning his focus to indoor and outdoor track and field, albeit squeezing in the occasional soccer game with a Baltimore Bays club team.

“We understand that soccer comes first in the fall,” said Jose Albornoz, the Loyola head coach in cross country and outdoor track. “We just hoped to draw Matt into track after we saw him in the Korrow Run. That was a recovery run for our varsity guys, but they were junior and seniors and he was in the eighth grade.”

Jablonski is a parishioner of the Cathedral of Mary Our Queen in Homeland. His family traditions include volunteering at Beans and Bread.

Asked to list his favorite athletes, Jablonski exposes a fondness for Brits and history. In soccer, he mentions Liverpool’s Stephen Gerrard. On the track, he starts with Sir Roger Bannister, who in 1954 became the first man to break four minutes in the mile.

Jablonski is making his own history. The week before Thanksgiving, he won the Jesuit cross country championship in New York’s famed Van Cortland Park, with the meet’s fastest time since 1980.

Last spring, he won the 1,600 meters at the MIAA track and field championships in 4 minutes, 18.3 seconds, believed to be a Baltimore area record for a sophomore.