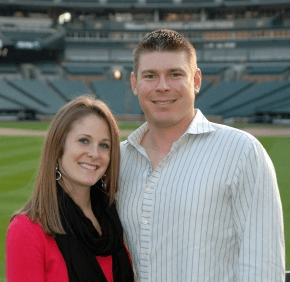 Jennifer Campitelli, 28, is undeterred by a national trend away from marriage. She looks forward to marrying Brian Bass, at Baltimore’s Basilica of the National Shrine of the Assumption of the Blessed Virgin Mary in November.

“Throughout my life, marriage is something I always wanted to do,” Campitelli said. “I wanted the spouse who supported me, shared in my accomplishments and my bad times. … With Brian, I couldn’t imagine not marrying him, not taking that next step.”

Bass is a professional baseball pitcher. Campitelli, who attended Glyndon’s Sacred Heart School and Notre Dame Preparatory School in Towson, works in ballpark relations for the Baltimore Orioles and met him in 2008, when he was with the organization.

Despite not being Catholic, Bass took part in the Catholic Church’s Pre-Cana marriage preparation with Campitelli, which included a sponsor couple.

“Being married in the Catholic Church is important to me,” Campitelli said. “It’s a sacrament and I knew that from the start. I think going through Pre-Cana actually opened his (Bass’s) eyes a little more.”

It is married life that they look forward to the most.

“Just having that ultimate partner is exciting,” Campitelli said. “Obviously, there’s starting a family. When it happens, it happens. I’m not rushing it. But that’s going to be an awesome experience. I look forward to be with Brian, raising the kids and helping shape who they’re going to be.”