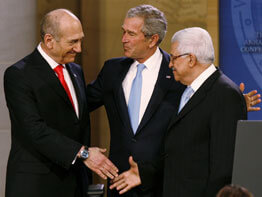 JERUSALEM – Media in the Holy Land showered attention on the Middle East peace conference in Annapolis, Md., but Israelis and Palestinians, jaded from years of failed talks, were not getting their hopes up too high.

“Everybody has been following it, but the results are ambiguous,” said Boutros Fawadleh, a 37-year-old English teacher at Our Lady of Seven Sorrows Latin Patriarchate School in the West Bank village of Aboud. “I think Palestinians are hopeful that this conference will be different.

“They hope the situation will be better for (us) but from past experience (these conferences) have just been words,” he said.

Though most of his acquaintances were supportive of the late-November conference, Fawadleh said, people still are not convinced that the meetings of political leaders will bring an end to the bloodshed.

In Gaza and the West Bank, the militant Islamic Palestinian faction Hamas held protests against the conference, and Palestinian police killed one Hamas protester in Hebron, West Bank.

Following the peace conference, a survey conducted by the Israeli Ha’aretz newspaper and the Department of Statistics and Operations Research of Tel Aviv University found that almost 42 percent of the Israeli public called the summit a “failure.”

The summit found no solution to the nagging problems of the Israeli-Palestinian conflict, but the parties did decide a final status agreement would be reached within the year. More detailed negotiations are to begin in mid-December.

Bernard Sabella, a Catholic Palestinian legislator and member of the Fatah political movement, said he viewed the summit as another step in a long process.

“I hope it will not be similar to the Oslo process” of 1993 which failed to produce any results, he said, noting that little can be accomplished in a short meeting. “It would have been better if it would have lasted for three months and something concrete came out of it.”

A lot of work still lies ahead and basic issues – such as the viability of a Palestinian state, water resources, refugees and the status of Jerusalem – still must be addressed, he said.

“There are still so many issues unresolved that if the process is dragged out too long we will be back at square one,” said Sabella.

Despite the cynicism of the experts, he said, the summit was a “resounding victory to the persistent efforts of (U.S. Secretary of State Condoleezza) Rice, (Palestinian President Mahmoud) Abbas and (Israeli Prime Minister Ehud) Olmert.”

But he warned that Abbas and Olmert now will have to face their detractors back home, with Abbas especially having to demonstrate to Palestinians that “he did not come back empty-handed.”

A tangible success along the security front, such as the gradual withdrawal of Israeli troops from West Bank towns to complement the growing ability of Palestinian police to enforce law and order, will allow the process to proceed, said Siniora.