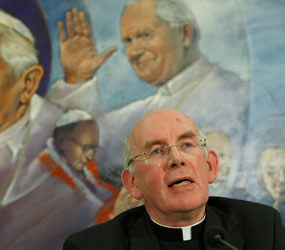 VATICAN CITY – Pope Benedict XVI said priestly sexual abuse was a “heinous crime” and a grave sin, and he urged Irish bishops to act courageously to repair their failures to deal properly with such cases.

At the end of a two-day Vatican summit on the sex abuse scandal in Ireland, the Vatican said in a statement Feb. 16 that “errors of judgment and omissions” were at the heart of the crisis. It said church leaders recognized the sense of “pain and anger, betrayal, scandal and shame” that those errors have provoked among many Irish Catholics.

“All those present recognized that this grave crisis has led to a breakdown in trust in the church’s leadership and has damaged her witness to the Gospel and its moral teaching,” the statement said.

“For his part, the Holy Father observed that the sexual abuse of children and young people is not only a heinous crime, but also a grave sin which offends God and wounds the dignity of the human person created in his image,” it said.

“While realizing that the current painful situation will not be resolved quickly, he challenged the bishops to address the problems of the past with determination and resolve, and to face the present crisis with honesty and courage,” it said.

The Vatican said the pope also had expressed hope that the Vatican summit would help the bishops unify and “speak with one voice” as they identify concrete steps to bring healing to those who have been abused and restore the church’s moral credibility.

Vatican spokesman Father Federico Lombardi said the meeting produced no specific policy decisions, nor was it intended to do so. He said the encounter, which included 24 Irish bishops and 10 top Vatican officials, was aimed at dialogue and direction-setting, and in that sense was a success.

The recovery from the scandal will be “a very long process,” he added.

Father Lombardi said he thought one of the most significant outcomes was the public recognition that there had been a failure “in leadership, in the governance of the church” in dealing with the sex abuse cases.

The spokesman said the meeting did not directly address some controversial aspects of the Irish situation, including the call for additional resignations of Irish bishops. Nor did the meeting discuss the idea, suggested by some in Ireland, that Pope Benedict add Ireland to his planned visit to England and Scotland in September and meet with some of the abuse victims.

The pope convened the bishops in response to the continuing fallout from the scandal, following an independent report that faulted the church for its handling of 325 sex abuse claims in the Archdiocese of Dublin in the years 1975-2004. The report said bishops sometimes protected abusive priests, and were apparently more intent on protecting the church’s reputation and assets than on helping the victims.

With the pope presiding, each of the 24 Irish bishops spoke for seven minutes, in effect giving the pope an account of themselves and their own actions, and reflecting on ways to best bring healing. The Vatican participants included officials who deal with doctrine, church law, bishops, clergy, religious life and seminaries.

The pope had earlier expressed his sense of outrage over the revelations, and was writing a special pastoral letter to Irish Catholics on the subject. Participants at the Vatican meeting discussed a draft of the letter, which was expected to be published during Lent, Father Lombardi said.

The Vatican statement said the Irish bishops had already helped put in place significant measures to ensure the safety of all children in church activities. It emphasized the bishops’ commitment to cooperate with civil authorities in Ireland and with the National Board for Safeguarding Children in the Catholic Church in Ireland.

But even as the Vatican meeting wound down, a new controversy was erupting in Ireland over the refusal of the Vatican’s apostolic nuncio to the country, Archbishop Giuseppe Leanza, to appear before a parliamentary foreign affairs committee. One member of the committee called the archbishop’s decision regrettable and incomprehensible.

Asked about Archbishop Leanza’s refusal, Father Lombardi said an apostolic nuncio, like all ambassadors, may be precluded by the normal rules of diplomacy from answering parliamentary commissions.

Cardinal Tarcisio Bertone, Vatican secretary of state, set the tone of the meeting at an opening Mass Feb. 15 with the Irish and Vatican participants. He said the most difficult trials for the church were internal ones, especially, as in this case, when the church sees “some of its own men involved in particularly abominable acts.”

The cardinal said renewal can be the outcome of this trial, as long as people take responsibility for their failings.

Cardinal Bertone compared the church to a ship in a storm, and said the prelates need to put their trust in Christ. The “more dangerous storm,” he said, was “the one that touches the hearts of believers, shaking their faith.”

There has been widespread indignation among Irish Catholics following the revelations of the sex abuse cases and the way they were handled by the bishops, detailed in a report last November by an independent commission headed by Judge Yvonne Murphy. Pope Benedict held a preliminary meeting with two Irish bishops in December.

Speaking on the eve of the Vatican summit, Bishop Joseph Duffy of Clogher said the meeting would not be a “cosmetic exercise” but a chance to tell the whole truth and lay everything on the table.

Bishop Duffy added that he was convinced that Pope Benedict was already aware of the gravity and complexity of the sex abuse cases.

“It’s my information that the pope is very well clued in on this whole issue, that even before he became pope, he had access to the documentation, that he knew exactly what was in the documentation, and that he wasn’t living in a fool’s paradise,” he said.

At a Mass for the Irish bishops in St. Patrick’s Church in Rome Feb. 14, Bishop Colm O’Reilly of Ardagh and Clonmacnoise said the prelates were especially aware this year of the Lenten call to confession and repentance.

“It is a time for undoing, insofar as this is possible, the damage our sins have done, for what is done and what we have failed to do. It is a time for a new beginning,” he said in a homily.