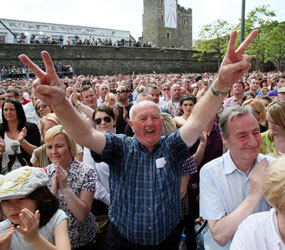 DUBLIN – Ireland’s bishops welcomed the finding of a report that said British troops’ killing of 14 Catholics in 1972 was not justified.

Two of the bishops were from Londonderry, Northern Ireland, where the incident – widely known as Bloody Sunday – occurred.

“We share the joy and relief of the families of those killed and injured on Bloody Sunday,” the bishops said in a statement June 16, the day after the release of the long-awaited Saville Report. “We acknowledge the hurt and pain of the many people who lost loved ones on these islands during the course of the Troubles. We continue to carry them all in our thoughts and prayers.”

The bishops acknowledged the witness provided by many clergy, including retired Bishop Edward Daly of Derry, “whose part in Bloody Sunday and its aftermath is deservedly recognized.”

One of the most enduring images of Bloody Sunday is a photo of then-Father Daly waving a white flag, while he and others carry a teenager’s body to safety.

Bishop Daly said the people of the city had been vindicated.

“At the time I said mass murder had taken place, and I still believe that today. Perhaps more people now believe that happened,” he said, adding that the report would help him close a chapter in his life.

On Jan. 30, 1972, troops from Britain’s Parachute Regiment opened fire on civil rights demonstrators seeking universal suffrage in Northern Ireland and an end to discrimination against Catholics in employment and access to housing. Despite evidence that one victim was shot in the back while lying on the ground and others were shot while fleeing, the British government’s first inquiry into the massacre, the Widgery Tribunal, exonerated the soldiers after concluding that they had fired in self-defense.

In a June 15 statement, Bishop Seamus Hegarty of Derry said: “The ways in which people on different sides of the community have viewed the events of Bloody Sunday and have interpreted their significance has been a source of pain and tension over the past three decades. The publication of this report now presents us with the possibility of some healing of those differences.”

Lord John Saville’s commission to investigate the incident was established in 1998 as part of the Northern Ireland peace process. The inquiry was expected to last a year and a half.

Apologizing to victims’ relatives in a statement to the British Parliament, Prime Minister David Cameron said: “What happened should never, ever have happened. … The government is ultimately responsible for the conduct of the armed forces and for that, on behalf of the government, indeed, on behalf of our country, I am deeply sorry.”

Summarizing the findings, Cameron said: “Lord Saville concludes that the soldiers of the support company who went into the Bogside did so as a result of an order which should not have been given by their commander. He finds that, on balance, the first shot in the vicinity of the march was fired by the British army. He finds that none of the casualties shot by the soldiers was armed with a firearm. He finds that there was some firing by Republican paramilitaries but none of this firing provided any justification for the shooting of civilian casualties. And he finds that in no case was any warning given by soldiers before opening fire.

“He also finds that the support company reacted by losing their self-control, forgetting or ignoring their instructions and training and with a serious and widespread loss of fire discipline. And he finds that many of the soldiers – and I quote knowingly – put forward false accounts to seek to justify their firing,” Cameron said.

A day after the publication, leaders of the Church of Ireland, the Methodist Church and the Presbyterian Church in Northern Ireland met with victims’ families and promised to work with them to forge new intercommunity relationships. The Irish bishops mentioned the visit in their statement.

“We acknowledge the pastoral leadership shown by the representatives of the other Christian Churches as demonstrated by their visit,” the bishops said. “Finally, we call on all those who are still committed to violence to recognize the futility of this approach, and we plead with them to turn to a constructive political path to achieve their goals.”