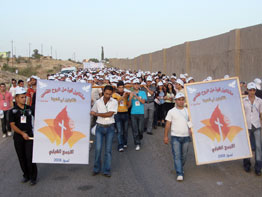 The bishops organized processions, catechesis, the Way of the Cross and Masses in several northern Iraqi cities. More than 6,600 Iraqi youths participated in the alternative World Youth Day.

Even a day before their departure from Lebanon July 14, the small entourage of Father Azzo and musicians still did not have the needed funds for their airfare to Iraq. Father Azzo said he prayed and, “miraculously, three benefactors came through just in time to pay” for a large portion of the trip, Father Azzo told Catholic News Service July 23.

Ms. Nehme, a 26-year-old Maronite Catholic, said it was her dream “to go and see the Christians of Iraq and to do something for them.”

“Music is my life, so this is all I know to do: to use my voice to give them hope, to send a message of love and peace,” she told CNS July 23.

“By chance, all the details for us to go worked out, as if God had prepared the way,” she said, adding that she was not afraid about venturing into Iraq. “Whatever would happen there, I would be ready.”

Father Azzo is no stranger to Iraq. The 42-year-old Chaldean Capuchin had visited 11 times before to preach to Iraqi Christians.

“I am just a little priest, a slave of Jesus. If I can bring hope, it will be the Holy Spirit working through me. I think Jesus will do something great,” he said before he left for Iraq.

Nehme said the experience was totally different than she had imagined.

Iraqi Christians “have so much love to give, so much innocence. So much purity,” she said. “They believe in tomorrow in a way that’s amazing. They believe that tomorrow is a better day.

“You always see death and pain on TV’s images of Iraq. We saw that. But we also saw peace, joy, hope, singing, music and living faith,” Ms. Nehme said. “We saw a huge amount of young people who still want to change the world. It was a completely different image of what you see in the media. They don’t show what is good, they show only what is awful.”

A French delegation from the peace movement Pax Christi also attended the gatherings.

In his preaching, Father Azzo said he spoke “about hope and peace and about Iraq’s rich history of civilization.” He said he encouraged them to remain in Iraq “and preach Jesus Christ.”

Father Azzo distributed booklets, prayer cards and images of Lebanon’s Blessed Jacques Haddad, a Capuchin beatified in June, and some hats imprinted with Blessed Haddad’s image. Many of the Iraqis already had World Youth Day hats.

The celebrations culminated with a Mass celebrated by Archbishop Sako at the Church of the Sacred Heard in Kirkuk July 20. It was attended by about 2,000 Iraqi youth. Father Azzo gave the homily and Nehme performed the music.

“People told us it was like a big Easter Mass, like the Resurrection,” said Father Azzo. “It was a two-and-a-half-hour Mass, but people kept asking us to continue with prayers, they didn’t want it to end.”Father Azzo said he hopes to organize more missions to visit Iraqi Christians.

“Their greatest need is peace and love,” he said. “Especially peace.”