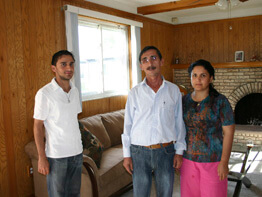 STERLING HEIGHTS, Mich. – Astefan Zrow Yousef was scared for his family.
He was scared of the persecution they endured because of their Chaldean Catholic faith. He was scared they would be forced to abandon their faith.
And he was scared they would be killed for trying to escape from their life in Iraq.
For much the same reason, Issa Toma, his wife, Nano, and their families had already fled from Iraq to the safety of Turkey.
Both men had a common goal – to live with their families in peace – and now they and their families have been resettled in the Detroit Archdiocese with the help of the archdiocese and other agencies.
In June 2004, after his younger children had finished school for the year, Yousef and his family left their home near Baghdad, Iraq, for Turkey.
“It was a very bad time,” he said through an interpreter at his new home in Sterling Heights. “We left everything behind. We had nothing. We had to flee to save our lives. We decided to flee before we got problems from anybody. It was very hard for us.”
For three years, the family lived in a basement in Turkey, working when they could. Yousef, his wife and their six children, the youngest now 17, arrived in metro Detroit in August.
They have a place to live – a house across the street from Yousef’s sister-in-law – and are working on paperwork to get themselves settled. They also have started attending St. George Chaldean Church in Shelby Township.
“We have to go step by step,” Yousef said. “I think we have a good future here, for everyone – especially the kids.”
Yousef’s family is one of many displaced Iraqi families leaving their home country to escape the persecution and violence there. The Archdiocese of Detroit has helped to settle more than 200 people since the recent wave of refugees arrived in July.
The family said they were thrilled when the found out they would be coming to the United States. “We were very excited,” said Shameran Zitto, Yousef’s wife. “We were waiting, minute by minute.”
The family now lives in a comfortable yet sparsely furnished home, with cozy couches and a fireplace, and a backyard with a patio. There’s not a lot of extra space – his four daughters share one of the three bedrooms – but it’s made homey with a few recent family pictures on the mantel and cookies in the kitchen. A picture of the Last Supper hangs above the dining room table.
Yousef said he’s determined to stay on the correct path here in the United States, applying for their Michigan identification cards, learning English, finding jobs and becoming a part of the community.
“We are going to try to do things the right way, follow the rules,” he said. “We are happy and excited to be here.”
Yousef’s son, Moushtaq Zrow, 23, has kidney problems and needs to have dialysis several times a week. In Michigan, he has much better access to a doctor, and his health has improved. However, he will eventually need a kidney transplant, and his family will likely have to find a way to pay for the procedure.
Their faith has been strengthened by their trial, Yousef said, and they are a stronger family because of what they have gone through together. The family also prays for everybody left in Iraq, he said.
He said he does not expect to see peace in Iraq in his lifetime. “It’s not easy,” he said. “There are a lot of problems.”
A few blocks away, in another modest house in Sterling Heights, the extended Toma family is also getting settled into a much safer life. The Tomas, their younger children and their son’s family fled from northern Iraq to spend four years living in a small apartment in Turkey before they were approved to come to the United States.
In Iraq, the children were prevented from going to school, the parents couldn’t work and the family couldn’t go to church.
“The situation was very bad,” Nano Toma said, also through an interpreter, Sam Monsour, of the Archdiocese of Detroit’s Refugee Services office. “There were a lot of problems for Christians at the time.”
They fled with nothing but the clothes on their backs. “Nothing. We lost everything,” she said.
In Turkey, they applied to get refugee status in the United States and eventually received permission to fly to the U.S., arriving in late August. They have distant family that lives nearby.
What’s most important to the family is that they are living in a safe place, in a safe country, they agreed.
Zena Toma, Nano Toma’s 19-year-old daughter, is already taking English-language classes and is singing in the choir at St. George. The family attends Mass there and at St. Joseph Chaldean Church in Troy.
“The plan is to go to school, to learn English, to learn the language and to find a job,” Nano Toma said. “That is most important – to go to school.”
The Toma family still has other members in Turkey, and Nano Toma said she prays every day for friends and family there.
“We ask God to save everyone, and to let everyone leave that country,” she said. “Our faith is in God and in Jesus Christ.”