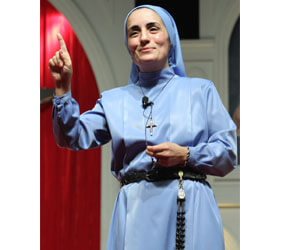 COLLEGE PARK, Ga. – Iraqi Sister Olga Yaqob grew up in a war-torn nation wondering if her country would ever see peace.

“I prayed for peace every day,” she said. “I thought, there has to be a way to stop the war, as I witnessed one funeral after the other. I thought this shouldn’t be the reality of how we treat each other. God says, ‘Peace be with you’… and we Christians have a responsibility to speak and preach about peace; I wanted to become a missionary of peace.”

The 4-foot-10-inch Iraqi woman – dressed in the simple blue habit of her order – addressed a crowd in the cavernous Georgia International Convention Center hall, telling her listeners how she came to embrace the Catholic faith, enter religious life and start a religious order – the Missionaries of the Virgin Mary.

She was one of four speakers who, during the Atlanta Archdiocese’s recent eucharistic congress in College Park, shared a similar message: that the “abundant harvest” of faith starts with just a small seed planted in the wild garden of life’s trials and tribulations.

Young Olga could have been shielded from the carnage of war because of her family’s wealthy status. But she didn’t shy away, even when she saw the devastation caused by war up close as a teenager.

She helped prepare the bodies of the war dead for funerals. As she washed and cleaned the bodies, many horribly disfigured because of their injuries, she wept.

She grew up in the Assyrian Church of the East, an ancient Christian church that broke with the Catholic Church in A.D. 431, but that began a fruitful theological dialogue again with Rome starting in the 1990s.

Her own young seeds of faith – and that desire to become a missionary of peace – were cultivated by a Catholic family who invited her to Mass and showed her how to pray the rosary. It was while visiting a Catholic church that she also learned about Mary and her role in the church.

“I thought, who can teach me to be closer to God than Mary,” Sister Olga said.

“Who can teach me more about peace than the Prince of Peace himself,” she said, as she reflected on the gradual growth of her Catholic faith.

Her faith grew despite the adversity she faced as she eventually began to embrace the Catholic Church and a celibate lifestyle, much to the dismay of her family and the church of her childhood.

Disowned by her family for running away to avoid an arranged marriage, she lived among the homeless helping others while she built her own faith life.

Eventually, her piety and good works led her to be invited to start an Assyrian order of sisters by her bishop in 1995. But the Assyrian Church after several years rejected her because she continued her Catholic practices of praying the rosary and attending daily Mass. With the help of Jesuits, she came to the United States to study in Boston.

There, while studying English, she began helping students at Boston University with their faith. She was able at last to join the Catholic Church and was asked by Boston’s archbishop to become the Catholic chaplain at the university. Now Sister Olga has been invited again to start a new order of sisters, this time by Boston Cardinal Sean P. O’Malley, head of the archdiocese since October 2006. The order is going to be called Daughters of Mary, Our Lady of Nazareth.