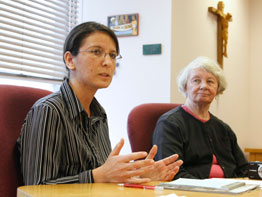 NEW YORK – An Iraqi Dominican nun June 5 described life in her war-torn country as one of suffering, violence and fear of kidnappings and attacks on civilians.

Nonetheless, she said, “We can only have faith and hope. I pray and hope that things get better, or else I won’t be able to continue my life and my vocation.”

Sister Diana, a Dominican Sister of St. Catherine of Siena, spoke at a briefing at the New York headquarters of the pontifical agency Catholic Near East Welfare Association. She did not use her surname for fear of reprisals against family members in Iraq. Sister Diana’s brother and six cousins have been killed there since the war began in 2003.

Before the war, life under sanctions was difficult, she said, but there was little violence and she and others were free to pursue their education and worship openly. Now, violence is rampant and random, medicine and medical care are in short supply, electricity is limited to several hours each day, travel is difficult and students only attend school sporadically.

“People thought (the war) would change Iraq, but it didn’t turn out the way they thought,” she said. “We thought it would be different. They promised us there would be freedom.”

Instead, Sister Diana said, “the future of our children is in danger. It’s kind of a tragedy when kids grow up seeing car bombs and bodies in the street. This is not normal. It’s like a fiction movie.”

Sister Diana graduated from the University of Mosul in 2004. She said she studied by candlelight because there was no electricity or gas for generators. She described the presence of soldiers at the university as guards and said she heard explosions while she was in class. She said education is free in Iraq, even through college.

“We love education. We love to go to school. We like to study hard,” she said.

Some 1,600 students attended the University of Mosul when she was a student. Last year, she said, eight students and three professors were kidnapped and held for ransom. They were tortured and eventually released, but Sister Diana said that no more than 400 students, including her niece, now go to classes.

“Sometimes it takes them three hours to get to the university (because of the security situation) and some only go one day a week, so there’s not much learning,” she said. “Muslims and Christians have the same suffering.”

The violence in Iraq is perpetrated by different groups, she said, including terrorists, foreigners and opportunistic criminals. Sister Diana said U.S. soldiers “shoot without knowing who’s innocent.” She said her eye doctor was fatally shot by a U.S. soldier as he left his office one evening.

Sister Diana said, “If you knock on doors in any Iraqi city, each family will tell you a different story of violence and loss.” She said her brother, the married father of four children, was killed by “masked people” one morning after he left for work.

She said his widow asks, “What is his guilt? What did he do? Why is this happening?”

Christians have historically been a tiny minority in Iraq, but their numbers have shrunk dramatically, to about 3 percent of the population, since 2003. Most Iraqi Christians are Catholics and many of the estimated 350,000 Catholics still in Iraq have sought refuge in the northern province of Kurdistan.

Sister Diana said churches in the northern villages are packed, but that “it is hard for Christians in the cities to practice their faith as they used to do before.”

She said formerly crowded city churches now see 20 to 30 people at a service. Christians were “given a choice of paying a ransom to practice their religion, converting to Islam or leaving their house and all their belongings,” she added.

Sister Diana said more than half of her congregation’s sisters are under age 50 and “vocations keep coming. We have three novices entering in September.” She added, “We are a diverse community and we work for everybody in Iraq, not just Christians. We work together for the common good.”

Asked what four more years of war would mean for the Iraqi people, Sister Diana said bluntly, “The people will be gone. There are already 2 million dead and 4.5 million refugees or internally displaced.”

She added that it is hard to imagine a solution to the situation, “because the solution is not in our hands. We can only have faith and hope.”

The Dominican Sisters of St. Catherine of Siena are an Iraqi religious community dedicated to catechesis, education and health care in Iraq and Jordan. Their members are drawn from Catholic and Orthodox churches. They administer catechetical programs throughout Iraq, staff an orphanage and kindergarten in Mosul, direct a hospital in Baghdad and manage clinics for refugees in Jordan in partnership with the Pontifical Mission, the Middle East operating agency of the Catholic Near East Welfare Association.

Sister Diana has been living with a group of Dominicans in Michigan since 2006.

“We’re not refugees. We’re here for a while and we’re going back to build our country,” she said. “Our country is suffering and our main concern is how to help (it) come to a new birth.”