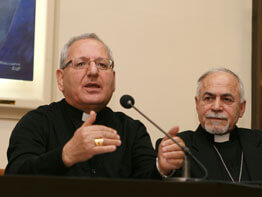 VATICAN CITY – Iraqi Catholic bishops called on Pope Benedict XVI to convene a synod to address the mass exodus of Christians from the Middle East and the lack of full religious freedom there.

They also expressed hope that the new U.S. administration under President Barack Obama would be able to bring peace and security to Iraq before withdrawing U.S.-led troops.

The bishops, in Rome for their “ad limina” visits to report on the status of their dioceses, spoke during a Jan. 22 press conference at Vatican Radio.

Chaldean Archbishop Louis Sako of Kirkuk said a general synod dedicated to the challenges Christians face in the Middle East would help the church forge a clear plan of action for the present and future.

“We can’t do anything by ourselves that would be as well-researched, -prepared and -analyzed” as it would be during a two- or three-week synod, he said.

“We have no vision,” he said, so “a general synod would help us – all the bishops – to better see and study (the issues) together with the help of experts and the Holy See.”

A synod also would help the bishops come up with ways to tackle those problems and prepare for the future, he added.

“If there is no clear position or vision then Christians will no longer be present in the Middle East. Slowly they will leave this land that we call blessed but is now damned,” Archbishop Sako said.

He said topics of top priority for a potential synod would include the problem of Christians fleeing the Middle East, paying Christian witness in a predominantly Muslim world, relations with Muslims, the role of Christians in civil and political life, lack of full religious freedom and Christians’ prospects for the future.

Syrian Archbishop Basile Casmoussa of Mosul agreed that church leaders need to forge a concrete and clear plan for the future.

“Otherwise we will always just be following our parishioners, and sooner or later we will be following them abroad as our churches and communities disappear from Iraq and transfer out of the country,” he said.

Concerning the continued presence of U.S.-led troops in Iraq, the bishops said they supported Obama’s idea of a phased, responsible withdrawal from the country.

However, Chaldean Auxiliary Bishop Shlemon Warduni of Baghdad said a responsible withdrawal would not be easy because it would mean first bringing peace and security to Iraq, then withdrawing, with no strings attached.

“If the world and the major powers want to resolve the problem (of the war in Iraq) they can,” but they must do so with the best interests of the Iraqis in mind and give complete control of Iraq back to the Iraqis, he said.

He said that while Iraq is now in the hands of the U.S. coalition “there are many other nations that want to have (control of) Iraq.”

“I’ve said this before, take our oil, just leave us in peace, so we can live in tranquility with our ordinary and human rights,” said the bishop.

Archbishop Casmoussa said Christians faced great difficulties in Iraq long before the American-led invasion. However, after the occupation, “those difficulties have become a hundred times worse,” he said.

The real problem in Iraq is the lack of recognition and respect for ethnic or religious minorities, said the archbishop, who was abducted briefly in 2005 by unidentified gunmen.

“The majority does not accept the existence of the other except to use as a tool; it’s the same problem all minorities have – not just in Iraq, but everywhere,” he said.

Bishop Warduni and Archbishop Sako said democracy cannot be imposed – it must be taught and experienced.

To quell civil strife and overcome its divisions, Iraq does not need more weapons; it needs “experts that can set the ground for a democracy that’s appropriate for a country that has never experienced a democracy,” said Archbishop Sako.

Western concepts and forms of democracy and autonomy are not the same for the East, he said.

“Therefore, the international community has a duty to train people of the East to govern civilly in a way that respects others,” he said.

The bishops insisted that, despite the difficult and dangerous conditions Christians face in Iraq, leaving the country is not the solution.