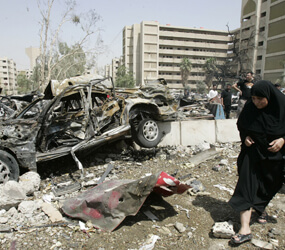 BEIRUT, Lebanon – Two Catholic bishops in Baghdad, Iraq, expressed shock and concern for their people following a series of targeted blasts that killed 95 people and wounded more than 500.

“With these acts of violence, we are losing everything,” Chaldean Auxiliary Bishop Shlemon Warduni told Catholic News Service by phone Aug. 20, the day after the attacks.

The Christians of Baghdad, he said, are “very upset and very sad” and condemn the violence.

“We are in a terrible situation, so we pray to almighty God to open the minds of everyone, to give them wisdom to do what is best for the rebuilding of Iraq, for its peace and security, for its progress and for the good of everyone living in Iraq,” Bishop Warduni said.

He appealed to “everyone, all over the world – big nations, small nations, big organizations, small organizations and the Iraqi people as well – to do what is best for Iraq, for the good of Iraq and its people, not their own interests.”

He also called for reconciliation among all the people of Iraq and for nations to look out for the welfare of all the people and “not the interest of (political) parties.”

“The peace depends on love; to love one another and to do the best for each other, not out of selfishness,” Bishop Warduni said. “Please, we ask the world to pray for Iraq.”

Latin-rite Archbishop Jean Sleiman of Baghdad told CNS: “We are shocked by this violence. The fear of violence is everywhere.”

Archbishop Sleiman said that Our Lady of Fatima Church in Baghdad was badly damaged in the Aug. 19 blasts. While he said he did not believe the church was specifically targeted, its roof was destroyed as a result of the nearby explosions. There were no casualties, he added.

“Violence is hitting everyone,” the archbishop said. One of the most important challenges, he added, is to encourage the Christians of Iraq.

“We have to begin again,” he said.

The violence Aug. 19, the bloodiest day so far in 2009, consisted of more than six blasts near government ministries and other targets at the heart of Iraq’s Shiite-led administration.

Iraqi Prime Minister Nouri al-Maliki said in a statement that the attacks were aimed at “raising doubts about our armed forces, which have proven themselves very capable of confronting terrorists.”