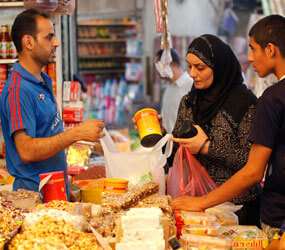 ROME – In offering Iraqi Muslims his best wishes for their observance of the Ramadan fast, the archbishop of Kirkuk, Iraq, also asked Catholics to show respect for their Muslim neighbors by not eating in public.

Chaldean Archbishop Louis Sako of Kirkuk expressed hopes that Ramadan would be “a privileged time of prayer and conversion, a time for growth in virtue.”

In his message, released Aug. 10, the eve of the start of Ramadan in Iraq, the archbishop said, “Ramadan is also an occasion to find the courage for forgiveness and to realize reconciliation and justice, to heal the wounds of Iraqis and to once again find peace, security and stability.”

He also asked “Christians to respect the feelings of their Muslim brothers and sisters, to not eat in public and to wear modest clothing, joining them in their prayers for peace and stability.”

During the month of Ramadan, which commemorates the beginning of the transmission of the Quran to Mohammed, Muslims fast from sunrise to sundown. Because the Islamic calendar is a lunar calendar, the corresponding dates on the Gregorian calendar change each year.

Reporting Archbishop Sako’s message, the Rome-based agency AsiaNews said that during this time of year, sunrise in Iraq is about 4 a.m., and sunset occurs about 6:30 p.m. The daily high temperature is usually well over 100 degrees in August.