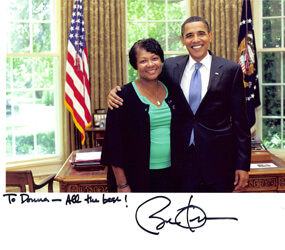 When Donna Gilmore looked at her newborn grandson, Cornell Winston Gilmore III, this past September, she thought about her husband.

“Oh my goodness,” Donna said. “He would be grinning from ear to ear. You love your children, but you’re in love with your grandchildren. He would be in love.”

On Nov. 7, the family will mark the sixth anniversary of the death of Cornell Winston Gilmore I. The Sergeant Major of the army was in a helicopter while it was shot down in Tikrit, Iraq.

The personable Cherry Hill-native was raised in St. Veronica’s parish and the youngest of 12 children. He was the rock of the family and a man that prayed over his wife before he went to work each day.

On the day she heard about her husband’s death, Donna asked to be alone and went outside the family’s Virginia home. She dropped to her knees and said, “Lord, you now have me.”

The man she loved since she was a teenager and her husband of 21 years was gone.

The couple’s two children, Cornell Winston II and Dawnita, as well as her three siblings and mother provided comfort.

Donna’s youngest sister, Margaret Brogden, was headed to the National Catholic Youth Conference in Houston when she received the phone call saying Cornell had been killed.

“He was the only big brother I ever knew,” said Brogden, the Archdiocese of Baltimore’s coordinator of youth ministry formation. “It was a crazy time. Donna was being so strong, but there were moments where we all broke down.”

Brogden remembered when Donna brought Cornell home. They were in their late teens and Margaret was about 13.

“I thought he had a big smile,” Brogden said. “He was nervous. I remember him sitting in my mother’s kitchen and not saying a whole lot.”

Eventually, he became part of the family and a quiet leader. Donna, whose mother was Baptist, eventually converted to Catholicism at St. Veronica’s because of Cornell.

“Church was foreign to me,” Donna said. “That was a great experience. It gave me structure.”

Donna and Cornell eventually strayed away from Catholicism and began to attend other Christian churches. Cornell’s family remains at St. Veronica’s.

After Donna and Cornell married, his military career required they move around the world. They were in Germany and Hawaii among other locations as they established their family.

Even though she was the wife of a military man, Donna never feared death for him. He was often not in harm’s way.

“I didn’t have that same foreboding fear all the time that some wives (of military members) do,” Donna said. “I thought he would be here forever.”

One day, a woman who worked for her husband called to say she was working for President Barack Obama at the White House. The woman said Cornell had been a steadying influence for her and that she wore a bracelet that honored Donna’s husband.

The woman asked if she wanted to meet and receive a tour of the White House.

Donna gladly accepted. When they met for the tour, tears flowed as they shared memories. Before Donna was guided through the White House, the woman asked if she would like to meet for lunch in the West Wing dining area.

On top of that, the president of the United States wanted to meet Donna if she had time.

Donna was taken aback by the offer and was later escorted into the Oval Office, where the president awaited her arrival.

President Obama said he heard so much about Cornell and found inspiration in his story.

“Walking into that office was overwhelming,” Donna said. “That place was breathtaking. It throws you off center. You’re like, ‘Woah!’ ”

During the meeting, Donna gave the president a memory bracelet. The next day, Donna saw the president make an appearance in Virginia. She studied his wrist as he spoke and saw that he was wearing the bracelet.

“I thought that was impressive,” Donna said.

Novembers are tough for Donna. She’s had difficulty returning to the Virginia church she shared with Cornell. Her connection and faith in God remains strong, she said.

Brogden said Cornell and Donna made each other better people.

“Donna has always been Miss Personality,” Brogden said. “I think in some ways, she drew that quiet out of him and I think he settled her some. They weren’t exactly alike, but they complimented one another.”

Six years after his death, Cornell Winston Gilmore I remains an integral part of the family.

“You sense his absence,” Brogden said. “No one will ever be able to fill that spot.”