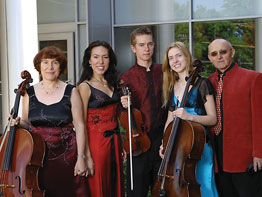 “So far?” mocked her father, Dr. Charles Borowsky. His wife, Cecylia Barczyk-Barowski and older daughter, Elizabeth, 24, joined in the laughter as they sat around the dining room table in their 80-year-old Hamilton frame house, nibbling on German chocolates and sipping tea.

A “good job” is a major understatement, and Frances knew it. The Borowsky family, which includes 20-year-old Emmanuel, a student at Indiana University’s prestigious School of Music, is a truly remarkable one on many different levels.

The children are classical music prodigies, and they and their parents have been nicknamed by European admirers “The American Virtuosi,” playing with their parents in concert, or by themselves, and producing critically acclaimed CD recordings.

And no wonder. Their mother, considered to be quite possibly the finest female cellist in the world, has achieved international recognition as a complete artist, successful teacher (Towson University), and great humanitarian.

Violinist Emmanuel, who was unable to be present for the interview, is considered to be one of the most outstanding musicians of his generation ever since his successful debut at the tender age of six.

As for Elizabeth, pianist and composer, who was invited to perform concerts in Bulgaria, Poland and Germany when she was just 9 years old, her accomplishments, awards and achievements are too numerous to list. Suffice it to say, she has performed as a soloist for some of the world’s finest orchestras at such distinguished venues as Carnegie Hall, the Kennedy Center, not to mention great European halls of music.

And at the end of this month, the Borowsky family is headed for China to perform in concert as a musical prelude to the Beijing Olympic Games in August.

“Confucius,” said Dr. Borowsky, who is fond of quoting the great Chinese sage, “proclaimed that great music is in harmony with the universe and harmony is able to restore order and peace to the world. Music, as a true mirror of character, makes pretense or deception impossible.”

The Borowskys are, however, practicing Catholics, parishioners of nearby St. Dominic, who also attend Mass at Baltimore’s Cathedral of Mary Our Queen and at St. Francis Xavier near their country home in Gettysburg, Pa.

They largely attribute their closeness as a family and their amazing talent and success to their faith.

Dr. Borowsky and his wife came to this country from their native Poland in the early 1980s, where they had grown up in the same region and where they both had the support of devoutly Catholic families, especially Mrs. Borowsky’s.

“It’s been a matter of God’s Providence and God’s guidance throughout our lives that has affected all parts of our life,” she said.

“In musical competitions or concerts I know that I have done the work before, and I say ‘now I do it for you, God, and now you guide me.’ If I couldn’t think of it this way I couldn’t deal with the pressure. And so I have always told my children to say a prayer and to trust God, and he’s going to help you and guide you through this.”

“I say a prayer before lunch every day at school,” chimed in Frances, now a sophomore, no less, at Towson University.

“We always pray before meals,” said Dr. Borowsky, “and we have evening prayers together as a family. Prayer makes community. Church and prayer are an integral part of our life, a life which is very active.”

Along with their faith, and perhaps hand in hand with it, the Borowsky children point to what they see as the crucial importance of their pre-college home-schooling experience.

Learning at home, often ‘online’ through texts and study guides provided by such educational institutions as The Calvert School, was not simply a decision made as a matter of convenience, given the family’s very active, travel-prone professional life, although it was a factor.

“More than anything else, though,” said Mrs. Borowsky, “it was because I think children spend far too much time at school. You have young children spending the same time as children in high school. We wanted to help our children with their music; and being in school from early morning to afternoon and coming home tired wasn’t going to help. So home-schooling worked, and it worked well and I think they learned more and they learned in a better, more self-disciplined way.”

“It was good,” said Elizabeth. “We were learning by ourselves. When we got it, we moved on. It was very good preparation for college, in my experience.”

None of the children has any regrets about missing out on elementary or high school life.

“We were lucky, I think, to avoid many of the less wholesome cultural and peer pressures,” said Elizabeth.

And, added Frances, “we were not socially deprived in any way, but through our association with other home-schooled families and our family, we got the right kind of social influences.”

“The children were growing up meeting good role models, not a Michael Jackson,” Dr. Borowsky noted.

Would Elizabeth follow the same recipe with her own children, if she chooses to have any?

“I’m not sure we can ever duplicate our childhood, the breadth of experiences our parents have given us; traveling around the world and our musical and academic experiences,” she said, “but what we can and should pass on to children are the fundamental core values of life that we have learned from our parents.”

Which is when Frances grinned and said, “So far they’ve done a good job.”