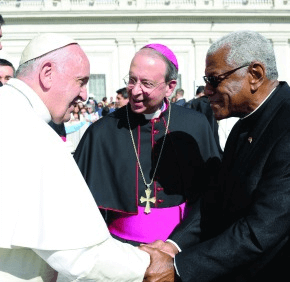 By Christopher Gunty
editor@CatholicReview.org
VATICAN CITY – Ten interfaith leaders from Baltimore traveled to Rome to pray for peace and healing in the city of Baltimore and to receive Pope Francis’ blessing on the work being done to improve conditions in the region, nearly a year after unrest erupted in the city after the death of a young man in police custody.
“If there’s anyone who understands the poor, the disenfranchised, victims of injustice, it’s Pope Francis and he gave us all such a lift,” Archbishop William E. Lori said of his opportunity to introduce each of the faith leaders to the pope after his general audience March 2 in St. Peter’s Square.
Muslim, Jewish and Christian leaders accompanying the archbishop were Imam Earl El-Amin, of the Muslim Community Cultural Center of Baltimore; Rabbi Steven M. Fink, of Temple Oheb Shalom; the Rev. Dr. Alvin C. Hathaway Sr., pastor, Union Baptist Church; the Rev. Wolfgang Daniel Herz-Lane, bishop of the Delaware Maryland Synod, Evangelical Lutheran Church in America; and the Rev. Dr. Frank M. Reid III, senior pastor, Bethel A.M.E. Church in Baltimore.
Also accompanying the group from the archdiocese were Bishop Denis J. Madden, auxiliary bishop of Baltimore; Father Donald Sterling, pastor of New All Saints Catholic Church; and William J. McCarthy Jr., executive director of Catholic Charities of Baltimore.
Rev. Hathaway said the trip “allows us to mirror to the community what unity is. I think when the community sees how we have congealed together, how we work together, how we pray together, share together, I believe that can only be a good spirit that can come to the people of Baltimore City.”
The group visited the Vatican during the year Pope Francis has proclaimed as an Extraordinary Jubilee of Mercy. Participants visited two of Rome’s four major basilicas, St. Paul Outside the Walls and St. Peter’s. Archbishop Lori noted, “On both occasions, we walked together through the Holy Doors, the doors of mercy. And what a beautiful thing because those doors are there to remind us of God’s love for us, of God’s love for all humanity, and about our need to be people of mercy and people of reconciliation. And we’re here to help reconcile a badly fragmented community,” he said, referring to concerns facing the city after the death last April of Freddie Gray, and the riots that followed.
The theme of mercy was foremost in the minds of the faith leaders, especially as they listened to the pope continue his series of audience talks about mercy and justice.
Rabbi Fink pointed out that the reading on which the pope reflected came from the book of Isaiah, and “talked about God’s love for his people and that God will always take us back in love, that we’re always able to repent and come back to God. That’s one of the most powerful messages in Judaism as it is in Christianity.”
Such justice and mercy are paramount aspects of Islam as well, according to El-Amin. “For this Year of Mercy, I understand it from an Islamic perspective, but it’s the same as a Christian’s perspective and it’s the same as a Jewish perspective and it would be the same as a Hindu perspective: that mercy is mercy and that God is most merciful,” the imam said.
“God gives without us even asking for something and God redeems us when we ask God to redeem us. And even when we don’t ask God to redeem us, God redeems us,” El-Amin said.
The imam said the group of faith leaders has worked together before. “It’s not something that just because of the Freddie Gray incident that we just started working together,” El-Amin said. “Baltimore has a long, illustrious history of interfaith dialogue and interfaith initiatives. So this is part of a continuum but much more intense because of the situation and circumstance that occurred last April.”
Rev. Reid said he was grateful for the opportunity to visit the resting places of early saints such as Paul and Peter, and he said the strength and peace displayed by the pope impressed him. The Bethel A.M.E. pastor said it is part of the reason Pope Francis has been able to make a difference in the world, even at a time when traditional religions are facing intolerance.
“The pope is an example of transformational tolerance and love, because of mercy,” Rev. Reid said. “The mess that we are in (in Baltimore) will not become a miracle unless we apply mercy to it: mercy in our dealing with individuals, mercy in how we deal with our own selves.”
As the murder rate in Baltimore continues unabated, Rev. Reid noted Scripture tells us to love our neighbor as ourselves. “In Baltimore, maybe that’s why we’re killing each other so much. We don’t love ourselves so how can we love other people? Mercy teaches me how to love myself in spite of my weaknesses so that my weaknesses can be transformed into strength,” Rev. Reid said.
The solidarity of these faith leaders was enhanced in their scant 48-hour pilgrimage in Rome. They hope to bring back that sense of cooperation to their work in Maryland.
Archbishop Lori said their in-depth conversations helped them learn from each other. “We talked about how we pray every day. We talked about some of the challenges we face in delivering educational and social services, and how we might network a little better among ourselves,” the archbishop said.
“What we kept talking about was our role, united as diverse faith leaders in building bridges in the larger community, whether that is with the political establishment in our state of Maryland and in our city, or whether that is across denominational lines, across socio-economic lines, across racial lines and barriers.
“We learned a lot from each other about the communities we are trying to serve,” he said.