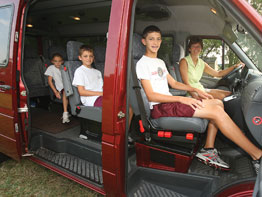 With the start of the 2008-09 school year, Michelle Bussard will once again head to the carpool line at St. Stephen School with five youths piled into her Honda Pilot.

“We’ve been doing it since the kids were in kindergarten,” said the mother of three girls, who carpools with her sister, Barbara Holt, and her two children to the Bradshaw school.

Because of escalating gas prices and concern for protecting the environment, even more parents are likely to pursue carpooling as an option. The benefits range from keeping up with children’s day-to-day activities at school to lowering the amount of wear and tear on the car.

Many schools make arranging a car pool a viable and hassle-free option.

“Our carpool setup is fairly simple,” said James Poisal, director of communications and events for Mount St. Joseph High School in Irvington, which has an enrollment of 1,050 students. “When a student registers as a freshman, his parents are given a carpool request form. If they decide they want to enroll in a carpool, they fill out the form and our office compiles the data by ZIP code. We then contact the individual families with the contact information of surrounding families who also wish to carpool.”

For Mrs. Bussard, a nurse, carpooling helps ease the stress of juggling arriving at work on time and getting the children off to school. Her sister arrives at around 7:45 a.m. to pick up the children on the days Mrs. Bussard works.

“My husband is in charge when I’m not here,” said Mrs. Bussard, a parishioner of St. Stephen. “I’ll have the uniforms laid out and backpacks packed and the lunches packed.”

The Bradshaw school, which has an enrollment of nearly 350 students, has a carpool drop-off-line in the morning at the entrance of the school hall. In the afternoons, student safeties help line up cars in orderly rows around 2:30 p.m. Children accompany their teachers outside to meet up with their carpools at dismissal time.

Parents seeking a carpool can advertise through the school bulletin.

St. Stephen parent AnneMarie Profili has arranged a carpool with her sister-in-law and a neighbor, sometimes chauffeuring home as many as nine students.

The mother of three drives a red Mercedes-Benz Sprinter, which is a commercial 10-seater van.

“Trying to round up seven kids out of three different doors, or sometimes nine kids, can be a challenge, but my van is so big it stands out,” she said.

Carpooling has come with its share of debacles, such as flat tires, or once, she forgot one of the boys on the way home.

“We were half-way home and did a U-turn, and he was sitting with the principal,” she said.

Mrs. Bussard said squabbling over seats and squeezing in instruments on band day are other common problems.

As for the perks?

“You get to hear a lot of interesting conversations about what happens during the school day,” Mrs. Profili said.