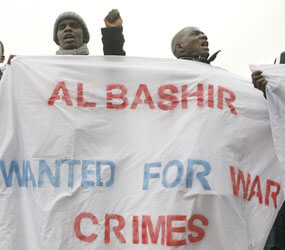 WASHINGTON – The International Criminal Court’s issuance of an arrest warrant for Sudanese President Omar al-Bashir on charges of war crimes and crimes against humanity opens the door for the United States to help bring peace to the war-torn nation, said author and anti-genocide activist John Prendergast.

“I think this is a tremendous opportunity for the Obama administration to name a special envoy and get on the ground in Darfur and implement a peace agreement,” Prendergast said during a nationwide teleconference put together by the Enough Project shortly after the court’s March 4 action.

Prendergast is a former U.S. State Department official who co-founded the Enough Project, an initiative to end genocide and crimes against humanity around the world. A Catholic study guide to his book, “Not on Our Watch: The Mission to End Genocide in Darfur and Beyond,” was released in February.

The warrant, the first against a sitting head of state by the court, charges al-Bashir with five counts of crimes against humanity – murder, extermination, forcible transfer, torture and rape, ICC spokeswoman Laurence Blairon announced March 4. The two charges for war crimes are for intentionally attacking civilians and for pillaging, she said.

The three-member court ruled 2-1 that there was not enough evidence to support a charge of genocide, a situation that American officials and several governments around the world believe has existed in the Darfur region, along Sudan’s western border with Chad.

How the Sudanese government will respond is unknown, Prendergast said, noting that some of al-Bashir’s staunchest supporters have been slowly backing away as the likelihood increased that an arrest warrant would be issued. Allowing the 65-year-old al-Bashir to remain in office would further isolate Sudan from the international community and would risk the loss of investments in the country’s extensive oil reserves, he explained.

“We have no illusions. This is a cabal, a junta, a group of people who make the decisions. Bashir is the face of that cabal,” he said. “If there was a replacement engineered, the consensus position is that it would have to be done with international relations in mind.”

Hours after the warrant was issued, demonstrators in support of al-Bashir took to the streets of Khartoum, Sudan’s capital. No violence was reported.

Humanitarian groups praised the court’s action and offered hope that peace eventually would come to Sudan.

The London-based Catholic Agency for Overseas Development said in a March 4 statement its staff would continue to provide aid and assistance in Sudan, as it has since 2005.

“Our primary concern is for those men, women and children across Sudan who are still in need. We must maintain essential humanitarian and development services to contribute toward a sustainable peace,” the relief agency said.

The U.S. bishops’ Catholic Relief Services staff members in Sudan were safe and monitoring the situation in the country March 4, said Michael Hill, a communications officer for the agency at its headquarters in Baltimore.

Amnesty International USA’s executive director, Larry Cox, welcomed the news from the international court in The Hague, Netherlands. He said in a statement that should al-Bashir leave Sudan the government of any country to which he travels would be obligated to arrest him and take him into custody.

“No one is above the law,” Cox said. “If you are charged with a crime you must stand up and face those charges in a court of law. President al-Bashir will have the opportunity to do this before the International Criminal Court.”

Notre Dame Sister Katherine Feely, director of the Education for Justice Project at the Washington-based Center of Concern and the author of the Catholic study guide to Prendergast’s book, was pleased by the issuance of the warrant.

“The ICC’s indictment of Bashir may lack teeth but it sends an important signal to both Bashir and to the people of Sudan that the world is watching and that indeed crimes against humanity have occurred,” she told Catholic News Service. “My hope is that this development will raise the spotlight on what has been happening in Sudan and will continue to generate the political will needed locally and globally to address the situation by pursuing justice and promoting a lasting peace.”

Al-Bashir has been president since orchestrating a 1989 bloodless coup against the democratically elected government of Prime Minister Sadiq al-Mahdi.

The International Criminal Court charges stem from a 2003-2008 military campaign against the Sudanese Liberation Movement, the Justice and Equality Movement and smaller armed factions opposing the Sudanese government; during the campaign, civilian populations were attacked. The United Nations estimates that 300,000 people have died and nearly 3 million more have been displaced.

The court charged that al-Bashir and the Sudanese government directed attacks by the Sudanese army allied with the Janjaweed militia, the Sudanese Police Force, the National Intelligence and Security Service and the Humanitarian Aid Commission.

Blairon said the court would send a request for al-Bashir’s arrest to the Sudanese government.

Prior to the court’s action, al-Bashir denied the charges and dismissed any court ruling as worthless.