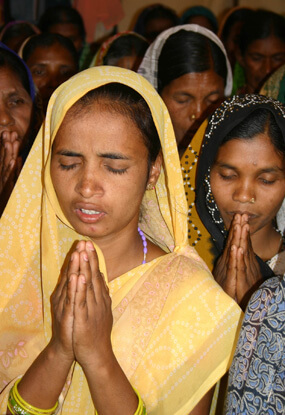 TIANGIA, India – As the sun went down, dozens of Catholics gathered in the refugee camp’s vacant tent in the troubled Kandhamal district of India’s Orissa state. While those who came early found space in the tent – large enough for 100 people – others stood outside as a local catechist led the Way of the Cross.

With the Orissa government banning religious practice outside the tent and allowing only private worship, the refugees were forced to pray the stations and rosary inside the tent. They switched between kneeling and standing for each station.

Besides an early morning Way of the Cross and an extra one on Friday afternoons, during Lent Catholics also recite the rosary together every evening inside the camp.

Extremist Hindu-led rioting and violence that began in Orissa state in August and lasted about seven weeks displaced 50,000 people, mostly Christians. The violence claimed more than 60 lives. Seven Christians were killed in Tiangia alone, and most of the houses owned by Christians in the area were looted and destroyed.

Mr. Nayak was caught in the violence. After running for his life from a Hindu mob in the mountains, he eventually hid under a rock outcropping. The mob reached his hiding spot, climbed onto the rock and shouted for the others to search for Mr. Nayak.

“I was mortified and started saying (the) rosary. By the time I finished two mysteries, heavy rain started and they went back,” he recalled.

The refugee camp in Tiangia was opened by the Orissa government in early February to bring the displaced Christians closer to their villages. But Catholics in the camps say Hindus are telling them they cannot return home unless they convert to Hinduism.

Father Praful Sabapati said the situation in Tiangia “is still very tense.” The priest, who works in the parish in Tiangia, spoke to CNS from the refugee camp run by the Missionaries of Charity at Janla, more than more than 150 miles from Tiangia.

Though Tiangia has more than 180 Catholic families, the first Mass in the area since August was celebrated Feb. 25, Ash Wednesday, inside the refugee camp – guarded by federal soldiers. It was also the first time a priest had been there since the August violence, said Father Sabapati.

In late February, Hindus quietly watched as refugees, accompanied by Orissa officials and police, assessed damage to their houses in a village near Tiangia. But as soon as the officials left in their vehicles, extremist Hindus took out weapons and chased the Christians, shouting “You can come back here only as Hindus,” said Goliath Digal.

Chandrakant Digal, a Catholic refugee, told CNS, “We thought our ordeal was over when we were taken (by government officials) back to our village.” But the Hindus in the village bluntly told them they could not return, he said.

Half a dozen Catholic families moved to open land near Raikia and pitched tents of torn plastic sheets and leaves.

“We hope God will find a way out for us,” said Chandrakant Digal, who wore a rosary around his bare chest as he hunted for food.

“Our church is still full despite continued threats for our people to become Hindus. They are very firm in their faith,” said Father Pradhan, pointing out that the houses of 600 of the 750 Catholic families in his parish had been looted, damaged or burned during the anti-Christian violence.

Deacon Ranjit Pradhan said the violence “has made me more motivated to become a priest.” He hopes to be ordained later this year.

“The faith our people have shown in the situation makes me think of the early Christians who were prepared to die for their faith,” said Deacon Pradhan, who is from Tiangia. His house was torched and his mother remains a refugee while his brothers have fled the Kandhamal district.

The church being built for the ordination has been destroyed by Hindu fundamentalists. The old church, built in the 1960s, also was destroyed.