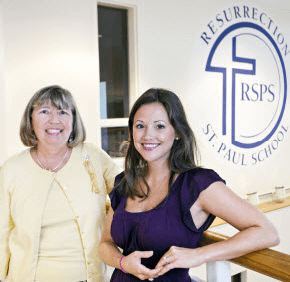 Katie Snyder wanted to be an actress when she was a student at Resurrection-St. Paul School in Ellicott City. She was an energetic learner and liked to talk – often too much, she admits. She recalls her former teacher, Terry Weiss, once meeting her in the hall and telling her to focus on her work.

The admonishment had an impact on Snyder, then a seventh-grader. Later that same week, she told Weiss she would try to meet her expectations.

“I liked that she (Weiss) could always tell it like it was,” Snyder said. “She saw that I was distracted and not as focused, but she didn’t make me feel bad about it. She just told me I needed to reprioritize. I try to do this with my students – to tell them what my expectations are. I think a direct approach really works well with young women.”

Snyder, 30, now teaches English at the Institute of Notre Dame in Baltimore. She credits Weiss – who taught her in fourth and seventh grades – with influencing her choice of profession.

Their story is part of an ongoing Catholic Review series on mentors.

Weiss left Resurrection-St. Paul 17 years ago to become principal of St. Louis School in Clarksville. She remembers Snyder as a sweet girl who was eager to please her teachers – “the kind of student that you want to have in your class, that asks questions and answers questions,” she said.

Unlike Snyder, who did not decide to become a teacher until she was attending St. Mary’s College of Maryland, Weiss knew at a young age she wanted to be a professional educator, she said.

“It’s very rewarding,” Weiss said. “Students come into the class, and they’re eager to learn. There are so many things they don’t know. You sort of hold the key, and you unlock the door to knowledge for them.”

Although Snyder has long abandoned serious ambition for the stage, her acting impulse finds an outlet in the classroom, she said, where she strives to be cheerful, positive and engaging – like Weiss, who believes that teaching should be fun.

“I think Mrs. Weiss was very aware of having a strong presence in front of the classroom, and having a strong sense of leadership, and also charisma,” said Snyder, who graduated from Mount de Sales Academy in Catonsville and is a parishioner of St. Casimir, Canton.

It didn’t surprise Weiss that Snyder became a teacher.

It is important for teachers to take their mentorship roles seriously, especially at Catholic schools, said Weiss, a parishioner of St. Louis.

“We’re Christ for these children,” she said. “We always have to remember that what we say, what we do and how we act is being witnessed by 20 children every day. It’s like you’re on camera all day long. It’s a huge responsibility, but it’s a wonderful thing.”