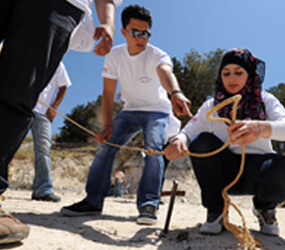 BEIT SAHOUR, West Bank – Bara’a Srur, 19, leaned over the edge of a sixteen-and-a-half foot wall with rappelling gear tied around his hips. His right hand held the rope tightly in place behind his back and he peered cautiously over his shoulder, down to where a counselor was holding the other end of the rope.

Though his heart was pounding quickly, Srur smiled with great bravado to his friends watching from underneath the shade of a nearby tree.

“Give me some encouragement,” he yelled out to them, and they began cheering him on and clapping their hands. Then Srur took the plunge, leaning back completely and descending the wall. His friends erupted in chants when his feet hit the ground.

“At first I was afraid,” admitted the young East Jerusalem college student, once back on terra firma. “But now I am OK. I feel like I did a big thing. I felt like a commando. If I can do this, I can do many other things.”

Srur and 60 other young Palestinians spent a week at one of seven adventure camps at a resort on the edge of the desert in Beit Sahour. The camps, sponsored by the U.S. bishops’ Catholic Relief Services, offered sports and physical activities but also taught the concept of nonviolence through lectures and presentations.

The camps are aimed at instilling young Palestinians with leadership qualities and nonviolence skills. For a majority of the participants it was the first time they had been urged to consider nonviolent responses as a viable option to the stress in their daily lives.

CRS project manager Ghaida Rahil, who accompanied the youth in all of the camps, said the rappelling exercise was intended to show the campers how to break through their fears and confront difficult and complex situations.

“We want them to see their own capacity of doing something dangerous, something scary, and to translate that into doing other things to help their society, even though it may seem difficult or scary,” she said.

The participants also worked on trusting their teammates when they had to walk blindfolded at night along a path with obstacles.

Working with local partners, including Middle East Nonviolence and Democracy, CRS invited about 60 university-age youths to each of the seven camp sessions, organized with participants from East Jerusalem and various cities in the Palestinian territories. The initiative was one component of the 30-month Youth Voices for Community Action program, initiated last year by the U.S. government.

During the camps, CRS staffers are able to identify young people – Muslims and Christians – with leadership potential. Up to 15 participants from each session will be invited to continue for more specialized training.

CRS program manager Khalil Ansara said staffers hope the young people will become ambassadors of change in their own communities first, then tackle the larger task of Palestinian-Israeli relations.

The camp also helped the youth begin to overcome ingrained prejudices, such as those between city residents and villagers, as well as learning how to deal with the differing social mores in their society, said Rahil.

“We are trying to give youth a different option instead of going only to the options of guns and violence,” Ansara said. “We identify a small number of youth leaders so we can train them to be the voice of nonviolence in society and at the same time become involved in the community. These youth can affect other youths.”

Everyone has experienced violence in their lives – political violence because of the separation wall and checkpoints or a violent situation at home, said Mohammed Badrieh, 19, a mathematics student from Bir Zeit University who attended a camp.

“People scream and shout; they kick things when they are angry. It is very hard when the (separation) wall separates families, when there are checkpoints every day,” said Badrieh. He said it takes him two hours each way to get to the university because of checkpoints. “All this makes people very stressed and depressed. When they go home they explode, maybe with their brother or sister, or with their mother.”

Though the aim of the program is completely focused on working within the Palestinian society to rid it of violence, it goes to reason that once the youth acquire these skills, they will be able to transfer them to other aspects of their lives, including how they deal with the Israeli occupation, he said.

“If they can solve the internal problems nonviolently, they definitely can do it with the enemy,” said Ansara. “It can affect how they deal with the Israelis. We don’t want bodies; we want people to realize that nonviolence is part of opposing the occupation.”

Mustafa Halabi, 21, an English major at Al-Quds University in East Jerusalem, spoke encouragingly of the possibility of passing on some information he had learned to other youths and of making a change in the local mindset.

However, Badrieh said cultural issues such as pride could make the acceptance of nonviolent resolutions to disputes problematic.

“I don’t think they will accept it, because of culture and habits. But we will have to try these things,” he said. The first step, he said, would be to create an awareness of the possibility of nonviolence.

“That is why I came to this camp, to learn and get ideas. I will do my best and, when something happens to me, I will remember what I learned at this camp and apply it to my life. As we are learning we must teach. I didn’t come here without a reason or just to have fun and meet friends. I came here with a purpose.”

The problem, he said, is that leaders have been doing a lot of talking but not taking action.

“It is time to start doing,” he said.

His friend Marwa Abu Najmeh, 20, a medical secretary student from East Jerusalem, smiled and said the hope of the future was with young children.

“When the little ones see us doing good things, they will do good things, too. Step by step we will get good results. We have to take the first steps,” she said.