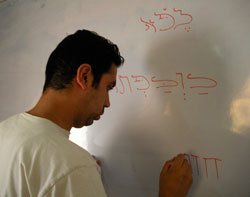 MAALOULA, Syria – Aramaic, the language of Jesus that flourished in villages thousands of years ago, is being kept alive in the Syrian desert, about an hour’s drive from Damascus.

Today, Aramaic is spoken in Maaloula, an ancient mountainous town with two historic monasteries, Catholic and Orthodox, both built into the cliffs.

Local residents’ Arabic education has never offered formal instruction in written Aramaic, but they have managed to pass down the spoken language from one generation to the next – a point of pride for Maaloulans, who are quick to note that they speak “the mother of Semitic languages.”

Aramaic also is spoken in two other towns in the area – Jabaadeen and Serkha – but with its historic churches and monasteries, Maaloula is the center of Aramaic culture.

The majority of Maaloula’s population, approximately 70 percent, is Christian. Two-thirds of the Christians are Catholic and the other third is Greek Orthodox. But the Christians in the town consistently say, “Muslims here also speak Aramaic.” Maaloulans are aware that it is not their religions but their native tongue that makes them unique.

In the summer of 2007, the language went through something of a renaissance in Maaloula when the town, with the encouragement of the Syrian government, opened the Aramaic Language Institute. The program teaches written Aramaic to students of all ages, particularly children, and is affiliated with the University of Damascus.

“I’ve been studying since the school opened,” said 11-year-old Murshed Diab, as he played with his friends on a hot summer evening after classes. “It’s useful. They teach us songs in Aramaic.”

The two siblings began singing an Aramaic song they learned in school, and their playmates quickly joined in.

The following morning, the children arrived at the Aramaic Language Institute at 9 a.m. sharp, exhibiting an unusual enthusiasm for summer school. Those who came by foot raced each other up the stairs of the building, and others – sometimes two or three at a time – rode on the back of their fathers’ motorcycles to get to classes.

In the reception room, the Aramaic teacher, Maaloula native Imad Rihan, greeted his colleagues. Before long, several of his students ran into the room to ask him if their grammar exercises were correct.

From there, the lesson was taught almost completely in Aramaic to the 14 children, all of whom participated fully, with some jumping out of their seats when they knew the answers.

“Twenty years ago, people started giving up on Aramaic,” Mr. Rihan explained. “Then 10 years ago, they realized how important it was, so they started teaching it in church.”

A group of scholars from Germany started studying Aramaic in Maaloula about 20 years ago, when the language had begun to die.

“The Germans opened our eyes and showed us we had something special,” Mr. Rihan said. “A lot of Arabic had entered the language, and it (Aramaic) had almost died. It was resuscitated.”

Now, Maaloula’s relatively new Aramaic Committee is trying to gather information on the language from the town’s elders to create a modern Aramaic dictionary. But Mr. Rihan said he hoped this was only the beginning.

“We want it to be taught in schools in Maaloula,” he said. “We will ask the Ministry of Education. I think it’s the best way to learn – from a young age.”