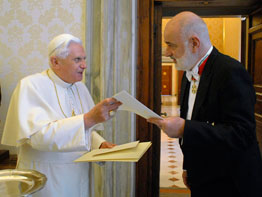 VATICAN CITY – In an address to Serbia’s new ambassador to the Vatican, Pope Benedict XVI called on all parties to act with “prudence and moderation” in response to “the current crisis in Kosovo.”

The pope said by choosing to live by the values stemming from Christian roots “we discover the courage to forgive and to accept forgiveness, to be reconciled with our neighbors and to build together a civilization of love in which all are accepted and respected.”

The pope made his appeal during an address to Vladeta Jankovic, the ambassador, who presented his letters of credential during a Feb. 21 audience at the Vatican.

Jankovic urged the pope to use his “enormous influence” to “preserve stability in the Balkans” and called Kosovo’s declaration of independence an injustice.

“With your devotion to the highest moral principles, Your Holiness knows better than anyone that injustice, which is called justice in only one unique case, always remains an injustice,” he said.

Jankovic also warned that Kosovo’s separation could spur other acts of secession in the world.

Peace and harmony can only be guaranteed, he said, if laws are respected and the integrity of individuals and nations is protected.

Serbia expects to “be granted the same treatment as that accorded to any other free, independent and democratic Christian country, which means that its territorial integrity and sovereignty, including the southern province of Kosovo, must be protected,” Jankovic said.

Kosovo unilaterally declared its independence from Serbia Feb. 17. Serbia vowed to fight the move but without using military force.

The United States has backed Kosovo’s independence. And as of Feb. 21 more than 20 states, including Italy, Great Britain and Germany, had recognized or said they intended to recognize the fledgling republic.

The pope said he understood how much the Serbian people have suffered as a result of recent conflicts and expressed his “heartfelt concern for them and for the other Balkan nations affected by the sad events of the last decade.”

He said the Vatican joins Serbia in its wish that “the peace which has been achieved will bring lasting stability to the region.”

“In particular with regard to the current crisis in Kosovo, I call upon all interested parties to act with prudence and moderation, and to seek solutions that favor mutual respect and reconciliation,” he told Jankovic.

Pope Benedict encouraged Serbia to continue to build “a future of peace, prosperity, reconciliation and peaceful coexistence throughout the region.”

He asked Serbia, a mostly Orthodox nation, to draw strength from its roots in Christianity and Jesus’ message of love.

“The followers of Christ are called to offer that service of love to all their brothers and sisters without distinction: Only in this way can long-standing tensions finally be laid to rest,” he said.

Kosovo has been administered by the United Nations since 1999 after NATO drove out Serbian forces accused of ethnic cleansing. The United Nations said it would continue to run Kosovo until a formal transition was scheduled.

The majority of Kosovars are ethnic Albanian and Muslim; the minority Serb population is concentrated in the northwest corner of the country.

In a Feb. 2 meeting with the president of Kosovo, the Vatican had emphasized that the encounter was not an endorsement of the Serbian province’s plans to declare independence.