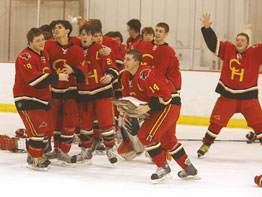 It was a long time in coming. The Calvert Hall College High School Cardinals were always on the doorstep but never could bring quite enough to the ice to dethrone the mighty Mount St. Joseph Gaels – until this year.

This year was different. The Towson Cardinals (6-2-2, 13-4-3) had a quick taste of victory in regular season when they faced the Gaels (6-1-3, 11-4-4), but last-minute Gael goals forced two regular season 3-3 ties, setting the stage for an exciting A Conference championship showdown Feb. 15 at Piney Orchard Ice Arena, Laurel.

In essence, the MIAA only knew of Mount St. Joe as the A Conference ice hockey champions; their reign had held for nine consecutive years.

But Cardinal goalie Stefen Blount and offensive magic-man Andrew Klick forced a new day for the Irvington school, as the Cards came away victorious with a 4-3 regulation win.

“I just concentrated on keeping the puck out of the net,” said Blount, a senior. “We finally beat them, and we finally won a championship. It’s a great way to go out.”

But the Cardinals were methodical in their offense, however, bringing the puck back into Gael territory to set their offense, executing sharp passes, with good use of the side boards and hard, aggressive shots on starting Gael goalie J. Paul McDonald.

The Cards caught fire midway through the second period with goals from juniors Andrew Klick and Andy Yancone to tie the game at two goals apiece. The Cards continued into the third and final period with more of the same, connecting two more times to take a 4-2 lead before the Gaels’ McCrumb netted the team’s third and final goal.

As time began to slip away for the Gaels, there was a furious effort to tie the game, but the Cardinals’ Blount was remarkable in the goal.

This was the Calvert Hall team’s first championship title since 1955.