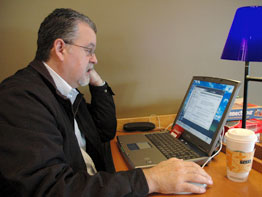 But as U.S. firms announce tens of thousands of layoffs, the unemployed information technology manager is getting a lot of company.

“I don’t know how long we can keep doing this,” said Mr. Walsh, who has been searching for jobs every day as he draws down his savings to support his wife and two sons.

Mr. Walsh, 47, worked at Intel in Hillsboro for more than 15 years. In 2006, his job was among more than 10,000 shed by the computer processor manufacturer, which was retrenching. In 2007, he was hired as a database manager at Merrill Lynch. Layoffs nixed his position there in fall 2008.

He has gone from a six-figure annual income to unemployment checks of $405 per week with no benefits. The family is withdrawing funds salted away for retirement, paying hefty penalties and taxes for doing so. They also might have to sell their house.

“We have no other choice,” said Walsh, a lifelong member of St. Anthony Parish in Forest Grove.

Oregon has been losing about 9,000 jobs per month since mid-2008. Big companies such as Intel, Freightliner, Cessna and Les Schwab Tires have made major cuts in the past year.

The state’s unemployment rate rose to 9 percent in December, up from 8 percent in November and 5.5 percent from the first half of last year. When January’s figures are announced late this month, the percentage will likely be even higher.

U.S. unemployment stands at 7.6 percent, the highest rate in 16 years. The nation’s economy shrunk by 2.6 million jobs last year, the most since 1945.

The work of social service agencies signals the depth of the problem. In December, St. Vincent de Paul of Lane County, Ore., distributed a record $286,000 to help families pay utility costs and stay in their homes. A third of the money went to people who never needed help before. Another third went to workers hit by layoffs.

In early 2008, Simone and Jimmy Knighton each had $16-per-hour jobs, pension plans and health coverage at Superior Lumber Co. The plywood and veneer mill is a major employer in Glendale, a small town in the mountains of southwest Oregon.

By year’s end, they both found themselves out of work and living in a Eugene shelter with their four children, including an infant.

When no jobs emerged in Eugene, Jimmy Knighton started pursuing leads in other states. In mid-February, he started work in a western Colorado coal mine at $23 per hour. He’ll save up until he can send for his family.

“We are really simple people,” said his wife. “We don’t want to be high society. We just want enough to pay our bills and maybe have a little extra to go to a movie or go to McDonald’s on the weekend.”

While many Oregonians are unemployed, or face that prospect, even more are underemployed.

Jose Vazquez, a bilingual physicist, recently landed a part-time teaching position. It’s a far cry from his dream – getting on the tenure track at a university.

“It’s been a very difficult time for me,” said Mr. Vazquez, a 48-year-old member of Ascension Parish in Portland. He has a wife and three children. “I haven’t been able to find a proper job. I’ve been gliding from here to there. I’d like more stability.”

His parish is trying to link laid-off employees with employers from the parish through the church bulletin.

“Normally, there is a sense of depression and uncertainty that goes along with job loss,” said Franciscan Father Larry Gosselin, who serves at Ascension. “But I am finding a different spirit in our times. There seems to be a sense of hopefulness in spite of the economic situation.”

He added, “We are being asked to simplify our lives and people seem to think that this is almost a good thing and not a bad thing.”