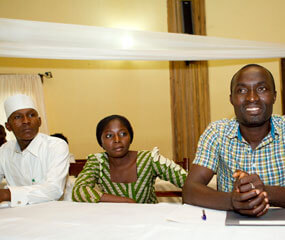 The cattle raiding had become extremely dangerous and violent, and Pax Christi helped develop a program that would bring together the youth warriors from different rural communities to discuss the problem and come up with alternative ways of relating.

After two conferences, participants were able to launch a peace and sports program called Playing for Peace. It engages the young people in a platform for debate and involves them in building a sports infrastructure.

The program in Sudan was described by Marie Dennis, co-president of Pax Christi International, at a July 1 conference in Rome on Catholic peace-building. Sponsored by the U.S.-based Catholic Peacebuilding Network, it brought together leading Catholic academics, Vatican officials and diplomats to examine the church’s role in preventing and resolving conflicts and reconciling societies.

Gerard Powers of the Kroc Institute for International Peace Studies at the University of Notre Dame, who helped organize the Rome conference, said Catholic peace-building may be the “best kept secret” of the church’s social teaching.

“From South Sudan and Central America to Congo and Colombia, the Catholic Church is a powerful force for peace, freedom, justice and reconciliation. But that impressive and courageous peace-building work of the Catholic community is often unknown, unheralded and underanalyzed,” Powers said.

He cited an off-the-record session sponsored in Colombia a few years ago by the Catholic Peacebuilding Network, when the church’s experts heard 20 Colombian bishops tell remarkable stories of successfully mediating among narco-traffickers, Marxist guerrillas and right-wing paramilitaries – and caring for the victims of all three groups.

A better-known program is the Mindanao Peacebuilding Institute, developed in the Philippines with the assistance of Catholic Relief Services and the Kroc Institute, which provides intensive training in religious peace-building, conflict transformation and community-based conflict resolution. The training has been so successful that it’s been expanded recently to include the Philippine military.

Spiritan Father William Headley, dean of the Joan B. Kroc School of Peace Studies at the University of San Diego, said the church has a number of natural strengths in peace-building, beginning with the large body of Catholic social teaching and its capillary presence in local communities. Reconciliation efforts often involve international Catholic organizations working closely with local church leaders.

In Burundi last fall, for example, church officials from several countries in Africa’s Great Lakes region met with representatives of Catholic aid agencies and the U.S. bishops’ conference to map out a strategic plan for regional peace and reconciliation.

Elsewhere, Catholic organizations like the Community of Sant’Egidio and Caritas have been on the front lines of peacemaking initiatives for many years, in some cases helping to broker peace agreements.

Cardinal Peter Turkson, president of the Pontifical Council for Justice and Peace, said that for the church, the core of peace-building is changing individuals.

“Violence manifests itself through people,” he said. “So peace-building starts with changing the heart. We have the tools and systems to develop peace on the ground. As Christians, we have faith and grace to change hearts.”

At the same time, the church has to make its voice heard on the factors that contribute to conflict, speakers said. Michel Roy, the new general secretary of Caritas Internationalis, noted the proliferation of small arms in places like eastern Congo, and said international action was needed to stop arms trafficking and trade.

Maryann Cusimano Love, associate professor of international relations at The Catholic University of America, told the conference that the church’s wide view of peace-building contrasts with the short-term approach of many international agencies, often limited to cessation of hostilities.

The church focuses on participation, reconciliation and long-term sustainability of peace agreements, which includes the healing of individuals and communities traumatized by conflict, Cusimano Love said. The United Nations aims at demobilization, disarmament and reintegration of armed groups – often with impunity and payment for those groups, and almost always in a process of negotiation that excludes women, she said.

“This has led to the critique of many U.N.-brokered peace accords as being men with guns excusing and paying off other men with guns for the violence they have done against women,” she said.

Spiritan Father Robert Schreiter, a professor at the Catholic Theological Union in Chicago, said one challenge facing the church is to translate its peace-building theology, ethics and practices into language that is intelligible to others engaged in peacemaking, including those of other faiths and those who work out of secular perspectives.

“There is recognition in these sectors that we as Catholics have important things to offer, especially in our understandings of justice and of forgiveness, but they must be made more accessible to others without compromising our faith,” he said.