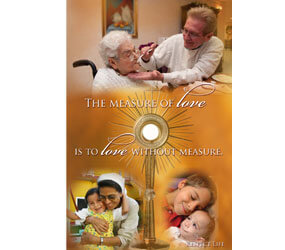 WASHINGTON – In a message marking Respect Life Month in October, the chairman of the U.S. bishops’ Committee on Pro-Life Activities called on U.S. Catholics to join Pope Benedict XVI in a worldwide vigil “for all nascent human life” on the Saturday evening of Thanksgiving weekend.

Cardinal Daniel N. DiNardo of Galveston-Houston also encouraged Catholics to demonstrate their commitment to life “through a loving concern for the good of others” and to work to ensure that health care reform, in its implementation, “is not misused to promote abortion or to trample on rights of conscience.”

“With each passing year, the need for personal and public witness grounded in God’s boundless love for each and every human being grows more urgent,” he said in a statement for Respect Life Month released Sept. 28.

“Instead of addressing (seriously ill) patients’ real problems by providing love, support and relief of suffering, this agenda urges us to eliminate the patient as though he or she is the problem,” Cardinal DiNardo said. “While critics want to portray the church’s witness as a narrow and negative ideology, it is just the opposite: a positive vision of the dignity of each and every human being without exception, each loved equally by God and so equally deserving of our love and our nation’s respect.”

He urged every Catholic to become “a voice for the child in the womb, and for the embryonic human being at risk of becoming a mere object of research, and for the neglected sick and elderly.”

“The loss of even one child and the pain experienced by the child’s mother and father in the aftermath of abortion should impel us to redouble our efforts to end legal abortion, and to ensure that every pregnant woman has whatever help she needs to turn away from this heartbreaking choice,” he said.

The cardinal cited several recent surveys that show “the rift continues to widen between the moral principles expressed by a majority of Americans and the actions of government” on such public policy issues as federal funding of abortion and government support for embryonic stem-cell research.

“If we allow the dignity of every human life to guide the decisions we make as voters and public policy advocates, we can surely succeed in creating a more just and humane society,” he said.

He said Catholics also will have an opportunity this year to join with Pope Benedict in response to his “unprecedented request” for a worldwide vigil for life Nov. 27.

“I heartily encourage all Catholics, whether at home or traveling over the Thanksgiving holidays, to take part in this special prayer, whose purpose, according to the Holy See, is to ‘thank the Lord for his total self-giving to the world for his Incarnation which gave every human life its real worth and dignity’ and to ‘invoke the Lord’s protection over every human being called into existence,’“ he added.

Cardinal DiNardo said the U.S. bishops’ pro-life and divine worship secretariats were working together to develop worship aids for the vigil, which the pope has asked be observed by every bishop in the world, as well as in “all parishes and religious communities.”