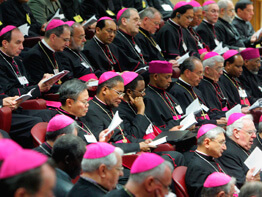 VATICAN CITY – Translating the Bible, making a copy affordable, helping people understand it and, especially, helping people live its message are important tasks for the Catholic Church, although the priorities differ from continent to continent.

Before individuals began addressing the world Synod of Bishops, synod organizers chose five bishops to report Oct. 6 on “The Word of God in the Life and Mission of the Church” in Africa, the Americas, Asia, Europe and Oceania.

The Vatican released four of the reports early Oct. 7; the report on the Americas was not immediately available.

Nigerian Archbishop John Olorunfemi Onaiyekan of Abuja, a well-known biblical scholar, said most African Catholics were thirsting so much for the word of God that “they were ready to lap dirty water from the poisonous pools in non-Catholic terrains.”

While the archbishop praised the remarkable work done by mainline Protestant churches and organizations to translate, print and distribute Bibles in Africa, he also said there were many anti-Catholic, fundamentalist groups using the Bible to try to lead Catholics away from the church.

“Africa is unfortunately the dumping ground for all kinds of crazy ideas from other continents,” he said.

Since the Second Vatican Council, Archbishop Onaiyekan said, the Catholic Church has made great strides in emphasizing the importance of the Bible in the liturgy and in the life of the faithful.

While missionaries were motivated by the Gospel, they taught the people the catechism and Catholic doctrine, not the Bible, he said.

Indian Archbishop Thomas Menamparampil of Guwahati, presenting the report on Asia, said that while Christianity was born on the continent, its declaration as the official religion of the Roman Empire in the fourth century identified it so closely with the West that most Asians resisted its message.

When Asians are drawn to Christianity, he said, they are attracted less by preaching than by the “‘word’ translated into action.”

Offering health care and education, helping the unemployed and the oppressed, caring for people with AIDS or drug addictions, fighting the caste system and discrimination against women, Catholics have shown Asians the true meaning of the Gospel, the archbishop said.

“Even where the Gospel is resisted most, the evangelical witness of socially relevant works finds welcome,” he said. “Silent but sincere service has an eloquence of its own.”

Referring directly to fundamentalist Hindu attacks on Christians in India recently, as well as other situations of pressure or outright persecution, Bishop Menamparampil said, “the patience manifested by the community, the restraint shown, the moderation in response, the spirit of forgiveness – all these have an evangelizing power.”

Croatian Cardinal Josip Bozanic of Zagreb said the word of God was the foundation of European history and was what kept East European Christians attached to their faith under communist regimes.

“All that has made European culture and civilization great – the Europe of the thousand cathedrals, the Europe of the custodians of art treasures, of literature and Christian music, the Europe that expressed real signs of solidarity and service to the poor through the emphatic force of Christian charity – found its origins in the Bible,” he said.

Acknowledging Europe’s declining religious practice and increasing secularization, Cardinal Bozanic said, “when man does not listen to what God says, inevitably he will start speaking in God’s place.”

Fortunately, he said, there appears to be a new interest in Bible reading on the continent and, particularly, in praying with the Scriptures.

Australian Bishop Michael Putney of Townsville, presenting a report on the word of God in Oceania, said liturgical rituals used at the July celebration of World Youth Day in Sydney and the enthusiasm of the crowds demonstrated the deep traditional reverence for the Bible among the region’s people and the thirst of young people to know more about the Scriptures and church teaching.