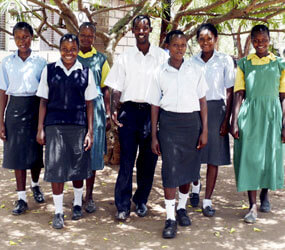 MERU, Kenya – A Kenyan diocese is giving girls a chance to grow up without participating in the traditional tribal rite of female circumcision, a practice that carries the risk of disease or death.

Catholic workers in the Diocese of Meru developed “An Alternative Rite of Passage,” pulling elements from the traditional rite referred to as female genital mutilation.

In other areas of Kenya, programs to stop the circumcisions were tried and failed. Meru diocesan officials decided to begin slowly. They began by talking to each group of what they described as “stakeholders” in the practice and educating them about the dangers of female circumcision.

Joseph M’Eruaki M’Uthari, the diocesan social development director, and Martin Koome, program coordinator, said they spoke with community leaders, members of the councils of elders, parents and the girls themselves to make sure they knew the diocese did not condemn the people’s culture.

Diocesan literature defines the traditional rite of passage as “a range of practices involving the complete or partial removal or alteration of the external genitalia for nonmedical reasons. The procedure may involve the use of unsterilized, makeshift or rudimentary tools.”

The traditional rite is practiced on girls ages 12-17 or even younger, depending on the parents’ wishes, since girls can be ready for marriage at these ages. Girls are taken into seclusion for about one week, taught about courtship, marriage and relationships. Then they are cut by a circumciser and given a few days to heal before returning home.

By 2001 Kenya had outlawed the practice of female circumcision, but the fines and penalties were minimal: 150 Kenya shillings (US$2) and/or three months in jail. The circumcisions continue because families believe this is the only way to find a husband for their daughters.

“The cut is harmful, but part of the (traditional) seclusions were good,” M’Eruaki said. “They gave the girls education in responsibility, respect and life skills.”

To date, the diocese has facilitated five programs – also called seclusions – with diocesan and parish staff and two women from the community attending each session to keep false information from circulating.

The alternative rite is ecumenical, and members of other faiths and their pastors have been invited to participate, M’Eruaki said.

At St. Peter’s Parish in Kajuki, one mother, Jane Kiura, said she had been circumcised as a young girl.

“I was told by my granny, my aunts, my mother, that this was a good thing before I did it,” she said. “Everybody encourages you and says it’s not a problem.”

Kiura did not want her daughters to go through the pain and subsequent problems – including the risk of disease and/or death and potential difficulties with childbirth – that could occur as a consequence of the rite.

Kiura said when her daughter, Gertrude, returned from the diocesan seclusion, “she sat down and went through the curriculum with her older sisters,” who were very interested in what she learned.

The diocese has initiated quarterly support forums for the girls who attended the alternative rites so they have the opportunity to discuss issues that arise. Girls who attended the alternative rite faced criticism from girls who had participated in the traditional seclusions, and they faced the possibility that their families would receive no dowries because they were uncircumcised.

One 16-year-old identified only as Ranky went to the parish’s first alternative seclusion and said she felt different afterward.

“The girls who have passed through the female circumcision tried to talk us out of the alternative rite of passage, but the teachers and our parents supported us,” she said.

The girls who participated in the diocese’s seclusions said they are talking to all of the local women and girls about the alternative rite.

“We are encouraging them (women) not to circumcise their children,” Ranky said.

Regina, also 16, said she learned about the alternative seclusion at church and wanted to know more about it.

“I wanted to go into (the diocese’s) seclusion,” Regina said. “I knew about the cut, and I didn’t want to do it. I knew the effects of female circumcision.”

Diocesan leaders also invited government officials in the local area to learn about the alternative rite.

Simon Maingi, senior chief in the area and a member of St. Peter’s, said he was convinced the diocese’s seclusion would work after he learned about the program and the curriculum that had been developed.

The diocese has facilitated the alternative rite with 641 girls, and an additional 87 also went through the program when one parish facilitated its own seclusion.

“Some parts of the curriculum have become parts of our sacramental preparation for the sacraments of initiation,” he said.

Father Majau said he also participated in the rescue of six young girls who were among 19 girls taken for circumcision.

“The circumcisers had hidden them in various places, and Jane (Kiura) kept her eye on them through telephone conversations with friends,” Father Majau said.

The pastor called the chief district officer and, with nine armed guards, they found the six girls.

“We took them to church for prayer,” he said. The other 13 escaped but later were circumcised.

Father Majau said the alternative rite is replacing old traditional values with education and a chance to grow up without abuse.

“It’s a slow process,” he said. “It will take more than one generation” to change.

The diocese has also introduced children’s rights clubs to begin educating those younger than 12 about their human rights.

“The most exciting” part, M’Eruati said, is “to see the change, a shift in attitude in the people. They see a different way of life, a better way of life is possible.”

Donations to the Alternative Rite of Passage project may be made online at www.crs.org/donate, or by calling 1-800-736-3467. Checks or money orders may be mailed to Catholic Relief Services, P.O. Box 17090, Baltimore, MD 21203-7090. Donors are asked to note “CRS Kenya Meru ARP project” in the online comment field or the check memo line.