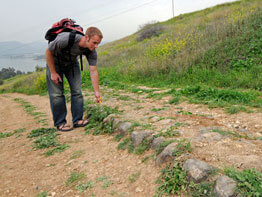 TABGHA, Israel – As the two hikers reach the parking lot of the Church of the Multiplication of Loaves and Fishes, a group of tourists scrambles into their waiting air-conditioned bus.

The hikers, Maoz Inon, 32, and David Landis, 25, have just taken a short hike down from the Mount of Beatitudes to the shore of the Sea of Galilee on part of the new Jesus Trail hiking route they have mapped out over the past five months.

“Can you imagine what it would be like for a hiker after walking the route for some hours and then to arrive here, or at another holy site? It is different than arriving on an air-conditioned bus,” said Inon.

The two young entrepreneurs – Inon, a Jewish Israeli, and Landis, an American Mennonite tourist who divides his time between Israel and other travel destinations – met over the Internet when Landis came across Inon’s travel blog.

For several years Inon had toyed with the idea of mapping out a hiking trail along the route of Christian holy sites in Galilee. He found a partner in Landis, who shared his passion for hiking and world travel.

Landis mapped out the trail using Global Positioning System navigation and Google Earth, which offers searchable satellite imagery and maps. A map or GPS files of the route can be downloaded from the Web site – www.jesustrail.com – and an experienced hiker can set out on his own. The Web site also includes information about the trail, accommodations, tour operators and other logistics.

The 40-mile trail, which follows the pre-existing Israel National Trail as much as possible, begins in Nazareth and passes through places of Jesus’ ministry: Cana, the site of the wedding feast and Jesus’ first miracle; Tabgha, where Jesus multiplied the loaves and fishes; and Capernaum, which served as Jesus’ home base during his ministry. The trail also includes traditional Israeli tourist sites such as Zippori, famous for its Byzantine mosaics, and the Cliffs of Arbel, with their panoramic views.

The trail culminates at the Mount of Beatitudes. An optional return route of equal distance passes through additional sites on a circuit back to Nazareth.

Most of the trails are accessible to all hikers, with varying degrees of difficulties. Public transportation is easily accessible from many parts of the trail.

The trail follows the growing trend in pilgrimage hikes such as the Way of St. James to Spain’s Santiago de Compostela and the St. Paul Trail in Turkey, said Inon. A group from Harvard University is putting together a trail following in the footsteps of Abraham – from eastern Turkey, through Syria, Jordan and ending in Hebron, West Bank – as an interfaith peace-building project, he added.

The Israeli Ministry of Tourism has been considering a similar idea for almost eight years, but the wheels of bureaucracy turn slowly, said Amir Moran, who is working on the planning of the Gospel Trail for the Ministry of Tourism and the Galilee Development Authority. The Ministry of Tourism path, which will in many places follow the Jesus Trail, will include marked paths, parking lots, shaded areas, rest areas and other facilities, Moran said. The project, which is expected to be completed in about two years, will cost between $2 million and $3 million, he said.

“We as a public group need to make sure the tourists have a safe path to follow. There are things we as public officials can do which Maoz can’t do. I very much support Maoz’s initiative. The idea is a very natural one,” said Moran.

Though it may be hard for the Western mindset to comprehend, Inon said with a grin that he and Landis expect no financial compensation for the work they are doing. They hope their path will attract more tourism to the area and encourage people to spend more time in northern Israel, eating at local restaurants, buying supplies from shops along the route and visiting the small villages and Christian monasteries in the area.

“You give and you get,” said Inon, adding that they both enjoy the work they are doing and the people they are meeting along the way.

“Hiking is a much more humble way to travel,” said Landis. “You are in contact with people that you meet, you have to work for it and appreciate it more.

“You can connect with the way Jesus walked and lived as a real person. It is something that is moving and living. It is not just something that happened a long time ago that existed in one place, but something you can participate in in a different way.