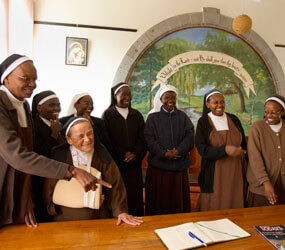 NAIROBI, Kenya – For several of the cloistered Carmelite Sisters at Mount Carmel Convent, their life of prayer began in their families, when they were children.

“My dad taught me to pray for others,” said Sister Bernadette, one of the younger sisters. She said her father told her he knew sisters who prayed for everyone, and she asked if they could pray for her, too. She said she began corresponding with the sisters and was drawn to their life of prayer.

Sister Constanza, who professed her final vows in January, said she attended Mass each morning because she did not live far from the local church. Each evening, her family gathered to pray the rosary and other evening prayers.

“I decided to give myself to the Lord for myself and for the salvation of souls,” and the best way seemed to be contemplative life, she said.

In an interview with Catholic News Service Feb. 16, several of the sisters talked about the path that led them to nearly continuous prayer each day.

“I never dreamed of becoming a nun,” said Sister Monica, who now serves as novice mistress for the order. In college, she met some Catholic students who began praying the rosary together, then attending daily Mass. One of the students wanted to become a Franciscan priest, and as he talked more about the saints, her interest grew.

She said she was filled with “a desire to belong to Christ.”

Sister Regina, a young nun who works with aspirants, said her family prayed the rosary and intercessions every day.

“I came from a praying family,” she said with a smile. She said she felt called to pray, “especially for priests.”

Not all of the sisters are from Kenya. Sister Agnes, from India, said a friend of her sister was becoming a Carmelite, and “somehow that mystique of Carmel drew me very strongly.”

The cloister was founded by Carmelites from Dublin in the mid-20th century. When the archbishop of Nairobi visited Cleveland, he asked the Carmelites there for help, and seven nuns and three postulants flew to Kenya in 1951.

The three postulants – Margaret, Jean and Annamae – remain, now as some of the oldest members of the order.

Sister Margaret, originally from Pittsburgh, said when she was a teenager, she had visited the Carmelites in Cleveland, and they invited her to go with them to Kenya. They “took a chance” and took her along, she said. Since then, she has only traveled home to be with her mother when she died.

She and Sister Agnes spoke of how much the area around the cloister has changed. Today, it has been built up and surrounded by affluent homes. When they arrived, they were the only building on the hill, and they could see Mounts Kenya and Kilimanjaro in different directions. Now the city is too built up to see far, they said.

The two were there during the eight-year Mau Mau Uprising that started in 1952, and the Mau Mau, a tribal group, had a hideout in the valley. Sister Agnes said one of the local priests talked to the Mau Mau, who promised never to trouble the sisters, because they were holy.

Today, when young women apply to join the order, the sisters require that they finish high school and begin some other course work, Sister Monica said.

“It gives them time to mature a bit,” she said.

Sister Regina, who works with the aspirants, said she checks to see if candidates are “determined to live the life.”

An aspirant will join the sisters for three months to see if a contemplative life is something she really wants. The day begins with the prayers of the morning office at 5:20 and ends around 10 or 10:30 p.m. Other than a couple of hours of recreation, the day is spent in prayer. While the sisters work – sewing vestments and altar linens, printing greeting cards and making Communion hosts – they meditate. Meals, cooked by the sisters, are eaten in silence while one nun reads – to nourish the soul.

The sisters pray for their own intentions – pregnant women and mothers, priests, events in the world – as well as intentions of those who ask, including Muslims, Hindus and Protestants.

Sister Bernadette said they prayed for Americans before the 2008 elections “because we have our American sisters.”

“It’s not just like we are here for Kenya,” added Sister Regina.

CNS International Editor Barb Fraze and Visual Media Manager Nancy Wiechec are in Kenya on a trip funded by the Pontifical Mission Societies in the United States.