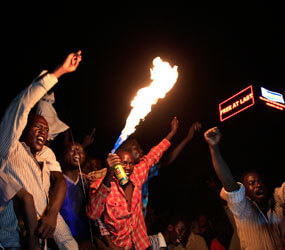 CAPE TOWN, South Africa – The flag of South Sudan was raised as the Sudanese flag was lowered at the July 9 ceremony in Juba to mark the new Republic of South Sudan’s independence.

“It was a graceful assertion of independence, without demeaning Sudan and its president,” said Dan Griffin, adviser on Sudan to the U.S. bishops’ Catholic Relief Services. He spoke with Catholic News Service by telephone July 10 from Juba, South Sudan’s capital.

Sudanese President Omar al-Bashir was guest of honor at the July 9 ceremony that marked the culmination of a January independence vote in which nearly 99 percent of the residents voted to secede.

The nine-hour ceremony took place at the mausoleum of the late rebel leader John Garang, who died six months after signing the 2005 peace deal that ended Africa’s longest-running conflict.

“It was a very moving ceremony,” said Steve Hilbert, Africa policy adviser to the U.S. bishops’ Office of International Justice and Peace, noting that “people were crying – for joy and probably also in sorrow for those who didn’t live to see this day happen.”

Soldiers and traditional dance troupes paraded, then the speaker of the southern parliament read the independence proclamation, and South Sudan President Salva Kiir took the oath of office.

“A lot of people came a long way to be in Juba for this day of independence,” Griffin said, noting that many people walked for days from other parts of South Sudan to join in the capital’s celebrations.

In the town of Nzara, 20 miles from South Sudan’s border with Congo, people gathered in a “peaceful and happy atmosphere” at the new government offices to see the flag raised, said Comboni Sister Giovanna Calabria, an Italian working in the town.

Sister Giovanna, who worked for 13 years in northern Uganda before moving to Nzara nine years ago, joined in the town’s celebrations with three other Comboni sisters who run a school, hospital and AIDS community. The fifth member of their community had to stay at the hospital “in case of emergencies,” she told Catholic News Service in a July 9 telephone interview from Nzara.

The town’s population of between 1,000 and 2,000 people, joined by “many others who came from faraway villages,” gathered into prayer groups the previous night, “asking the Lord for a peaceful new country,” Sister Giovanna said.

“Everyone brought food to share, and the sharing was a symbol of unity and cooperation,” she said, noting that the prayers continued throughout the night.

“There was a magnificent display of unity” at the Mass, attended by more than 1,000 people, said Bishop Ricard, who traveled to Juba to represent the U.S. bishops’ Committee on International Justice and Peace at the independence celebrations.

Vincent Bolt, Sudan country representative for the Catholic Agency for Overseas Development, the official aid agency of the English and Welsh bishops, said there was “a great feeling of church family solidarity” at the thanksgiving Mass.

The worldwide Catholic community’s prayers for peace in the region “are very much appreciated by the church here,” Bolt said in a July 10 telephone interview from Juba.

Hilbert said there were about 30 people of Sudanese descent on his flight from the United States.

“There were children with U.S. accents coming for the first time” to South Sudan “to be there when the dream of generations was realized,” he said.