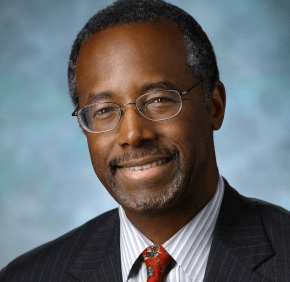 By George P. Matysek Jr.
gmatysek@CatholicReview.org
Twitter: @ReviewMatysek
WOODLAWN – By the time an unborn baby is 6 or 7 weeks old, his or her brain is developing at a rate of 400 million neurons a day – a staggering level of complexity, according to Dr. Benjamin Carson.
“It becomes much more complex than a yellow-striped spider or the snail darter or some of these things that the environmentalists are going berserk trying to save,” the former Johns Hopkins pediatric neurosurgeon said during a May 7 keynote address at the fifth annual Maryland Right to Life Banquet.
“Why aren’t they going berserk trying to save this complex baby?” he asked. “Talk about having priorities mixed up in this country.”
Just three days after announcing his candidacy for president of the United States in his home city of Detroit, Carson drew on his medical expertise to call on Americans to embrace pro-life values during his appearance at Martin’s West in Woodlawn.
Carson, a member of the Seventh-Day Adventist Church, served as director of pediatric neurosurgery at Johns Hopkins Children’s Center in Baltimore from 1984 until his 2013 retirement.
“When you look at a 10-week fetus, there’s a nice little well-formed nose and little ears, and little fingers and toes, and you can see the heart beating,” he said. “How can anyone sit there and say that’s a clump of cells that has no meaning? I don’t think they can.”
In an interview with the Catholic Review, Carson said the key to promoting a culture of life is educating the general public about fetal development.
“After spending my entire career trying to save lives, even operating on babies in the womb, I don’t see how you can be anything but pro-life,” Carson said.
In his public address, the Republican candidate noted that some pro-life organizations have partnered with daycare centers to allow struggling mothers to pursue an education and lift themselves out of poverty. More of those programs are needed, he said.
“Those daycare centers have to be provided not by the government,” he asserted, “but by business and industry and academia and Wall Street and churches and community groups and people who actually are there in the community and can develop relationships.”
Carson paid tribute to Cookie Harris, a leader in the pro-life movement in Maryland and a parishioner of St. Joseph in Cockeysville, who died last year. Harris, wife of Congressman Andy Harris, had been active in volunteering at pro-life pregnancy centers and had served Maryland Right to Life as director of special events. The Right to Life banquet was dedicated to Harris’ memory, with Maryland Right to Life leaders presenting an engraved vase in Harris’ honor to the Harris family.
Congressman Harris, also a St. Joseph parishioner, told a crowd of nearly 700 he intends to keep pursuing pro-life policies in the political realm as a way of honoring his wife’s legacy.
The Republican lawmaker noted that the House of Representatives will soon vote on a bill that would prohibit abortions after five months into a pregnancy, when unborn babies can feel pain. A similar measure failed to advance in the Maryland General Assembly this year.
Carson Scholars named
Five students from the Archdiocese of Baltimore were recently honored as “Carson Scholars” through the Carson Scholars Fund, a program founded by Dr. Benjamin Carson that awards $1,000 college scholarships to students in grades 4-11 who excel academically and are dedicated to serving their communities. The archdiocesan honorees are: Kendall Gray (Maryvale Preparatory School, Lutherville), Maeve McCarthy (Institute of Notre Dame, Baltimore), Abigail Richardson (St. Mary’s High School, Annapolis), Stephen Snyder (St. Margaret School, Bel Air) and Andrew Sontag (Our Lady of Perpetual Help School, Ellicott City).