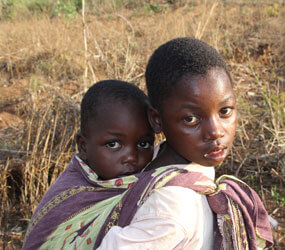 SAGAWIKA, Malawi – With a little mulch from last season’s corn stalks, a deeper hole with more seeds and a few other tweaks of traditional corn-planting techniques, the villages of Nduwa and Sagawika might make it through the next drought in better shape.

Though Malawi – slightly smaller than Pennsylvania – is not generally included in the reporting and statistics about the current drought and famine in parts of the Horn of Africa, it is subject to frequent crises because of inadequate rainfall or devastating floods. With 87 percent of Malawi’s population employed in agriculture, the difference between keeping and losing a season’s crop of corn – or having something growing besides corn – can determine whether villages like this prosper or people start dying from malnutrition, said local staffers of Catholic Relief Services.

In collaboration with the local Catholic Church, the U.S. bishops’ aid agency has been teaching these two communities new techniques for planting, irrigation and simple local banking, with the goal of ensuring that more Malawians make it through the next crisis.

Gifts Luwe, an employee of the Mzuzu Diocese, translated as residents of the two adjacent villages described the process they had gone through to participate in the savings and agriculture programs.

The community banking system made it possible for villagers to borrow small amounts of money to cover the cost of seeds, fertilizer or other items that might make the difference between a subsistence crop and one that yields enough to sell excess in the markets, providing money for other essentials.

Luwe said farmers were unaware that the simple habit of using the last potatoes from a harvest to provide the seeds for the next season was why their potatoes had been growing progressively smaller. Officials taught other farmers that replanting the same variety of wheat for 10 seasons was stretching the soil nutrients and the viability of that strain of wheat six seasons beyond the recommended cycle.

One of the farmers, Arnold Banda, the village chief, was able to get help from experts to address his problem of waterlogged crops.

Banda said he had been farming near a stream “but my yields were low because the field would get waterlogged.” A decades-old irrigation system of hand-dug canals did not quite address the flooding, so a new pipe is being installed, enabling farmers to plant farther up the hill, where flooding is less likely.

Banda also learned from a government extension agent that simply using new seeds would solve his problem of ever-smaller potatoes and that farmers should be taking no more than one-third of the flow of the stream to irrigate, lest they disrupt it permanently.

Banda said he realized, “We were practicing poor management.”

Adam Weimer, head of programs for CRS Malawi, said the water conservation techniques being tested in Sagawika have been shown to double the output of corn per acre of land in the first year and triple the harvest by the second or third years.

“These conservation agriculture techniques are being practiced worldwide as a way to help protect the soil from erosion, protect the nutrients and increase yields in a sustainable way,” Weimer said.

“This all grew out of efforts to promote agriculture as a way of ensuring food security” as opposed to livelihoods based entirely on raising livestock, for example, he added. “And we’re also making agriculture more resilient to climate changes.”

A plot of land that might normally yield 30-40 bags of corn is projected to produce up to 80 bags the first year using the conservation techniques, he said.

Patricia Zapor was a winner this year of the Eileen Egan Award for Journalistic Excellence from Catholic Relief Services. Along with two other winners, she accompanied members of the CRS Baltimore staff to Kenya and Malawi in October to see some of the agency’s programs.