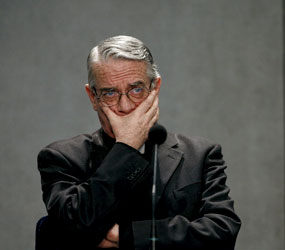 VATICAN CITY – In a letter to the world’s bishops, Pope Benedict XVI expressed regret that his lifting of the excommunications of four traditionalist bishops gave rise to a storm of protests and bitterness.

The pope said the controversy over Bishop Richard Williamson’s statements denying the extent of the Holocaust was “an unforeseen mishap” – one that could have been anticipated, however, by paying more attention to information easily available on the Internet.

The pope said he was particularly saddened at the reaction of some Catholics who seemed willing to believe he was changing direction on Catholic-Jewish relations and were ready to “attack me with open hostility.” He thanked “our Jewish friends” who helped clarify the matter and restore a sense of trust.

The Vatican published the 2,500-word letter in six languages March 12. The Vatican spokesman, Jesuit Father Federico Lombardi, called it a “unique, exceptional document” for its direct and personal style, and said it showed the pope had listened carefully to what people were saying.

The pope said he was taking the unusual step of writing to the bishops because the episode had generated “a discussion more heated than any we have seen for a long time,” both inside and outside the church.

He said his overture to Bishop Williamson and the other three bishops of the Society of St. Pius X was designed to close a wound and bring unity to the church, by lifting excommunications incurred in 1988 and opening the way to dialogue with the society.

But when Bishop Williamson’s comments about the Holocaust were circulated, “it suddenly appeared as something completely different: as the repudiation of reconciliation between Christians and Jews, and thus as the reversal of what the (Second Vatican) Council had laid down in this regard to guide the church’s path,” he said.

As a result, he said, “an avalanche of protests was unleashed, whose bitterness laid bare wounds deeper than those of the present moment.”

“I was saddened by the fact that even Catholics, who, after all, might have had a better knowledge of the situation, thought they had to attack me with open hostility,” he said.

“Precisely for this reason I thank all the more our Jewish friends, who quickly helped to clear up the misunderstanding and to restore the atmosphere of friendship and trust,” he said.

The pope acknowledged something critics have pointed out: that a simple Internet search would have revealed Bishop Williamson’s views on the Holocaust and helped the Vatican anticipate the reaction.

“I have been told that consulting the information available on the Internet would have made it possible to perceive the problem early on. I have learned the lesson that in the future in the Holy See we will have to pay greater attention to that source of news,” he said.

Pope Benedict said he deeply regretted another mistake: that the lifting of the excommunications was not adequately explained and gave rise to misinterpretations about the traditionalist society’s status in the church.

He emphasized that the removal of the excommunications was a disciplinary measure that affects individuals. But the fact that the Society of St. Pius X has no standing in the church depends on doctrinal reasons, he said.

“Until the doctrinal questions are clarified, the society has no canonical status in the church, and its ministers – even though they have been freed of the ecclesiastical penalty – do not legitimately exercise any ministry in the church,” he said.

In view of the importance of the doctrinal issues still to be clarified with the society, the pope announced that he was putting the Pontifical Commission “Ecclesia Dei,” which has handled reconciliation efforts with traditionalist groups, under the auspices of the Congregation for the Doctrine of the Faith.

“This will make it clear that the problems now to be addressed are essentially doctrinal in nature and concern primarily the acceptance of the Second Vatican Council and the post-conciliar magisterium of the popes,” he said.

He underlined what Vatican officials have said in recent weeks, that for the Society of St. Pius X full communion implies acceptance of Vatican II.

“The church’s teaching authority cannot be frozen in the year 1962 – this must be quite clear to the society,” the pope said.

After making his clarifications, the pope confronted the question: “Was this measure needed? Was it really a priority?” He answered with a heartfelt defense of his reconciliation move, saying the church cannot stop working for unity among its ranks.

“That the quiet gesture of extending a hand gave rise to a huge uproar, and thus became exactly the opposite of a gesture of reconciliation, is a fact which we must accept. But I ask now: Was it, and is it, truly wrong in this case to meet halfway the brother who ‘has something against you’ and to seek reconciliation?” he said.

The pope also asked whether the church could be totally indifferent about a traditionalist society that has 491 priests, 215 seminarians, six seminaries, 88 schools, two university-level institutes, 117 religious brothers, 164 religious sisters and thousands of lay faithful.

“Should we casually let them drift farther from the church?” he said.

He offered a special thought for the society’s priests, saying he did not think they would have chosen the priesthood unless they had a love of Christ and a desire to proclaim the Gospel.

“Can we simply exclude them, as representatives of a radical fringe, from our pursuit of reconciliation and unity? What would then become of them?” he said.