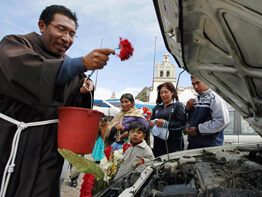 LIMA, Peru – When Venezuelan President Hugo Chavez told Archbishop Roberto Luckert Leon recently that he would “see him in hell,” he was fanning the coals of an ongoing war of words with Catholic leaders.

And when Bolivian President Evo Morales’ government picked a fight with that country’s bishops shortly after his inauguration, he seemed to be biting the hand that had helped the country’s grass-roots movement put a president in power.

But while some of the region’s political leaders appear to be trying to distance themselves from the institution that has been a political as well as a religious force since the Spanish conquistadors arrived, the Catholic Church continues to influence life and events in Latin America.

The sometimes quirky relationships have been particularly evident in the past 15 months, as presidential elections were held in a dozen countries, some with surprising results. In Bolivia, Morales swept to power on the first ballot – unheard of in a country where in recent decades the presidency had been decided in backroom brokering among the traditional major parties.

But although President Morales’ base of support is in grass-roots groups, many of which also have a close relationship with the Catholic Church, his government squared off with church leaders early in his presidency over the teaching of religion in public schools. Eventually the government backed down in what some observers say was a tacit acknowledgment by Morales that he cannot afford to antagonize the country’s bishops.

In a speech after his re-election in December, President Chavez, who has had a stormy relationship with Venezuela’s bishops, compared his vision of the nation’s future to “the kingdom of Christ,” which he called “the kingdom of love, of peace, of justice, of solidarity … the kingdom of socialism.”

In Nicaragua, the former leader of the Sandinista revolutionary government, Daniel Ortega, was elected president in November and won warm words from Managua Cardinal Miguel Obando Bravo, although President Ortega’s relationship with the church had been stormy in the 1980s. President Ortega’s party recently backed strict abortion legislation supported by church leaders.

In Chile, an ecumenical church service marked the inauguration of President Michelle Bachelet, who describes herself as agnostic, while Peruvian President Alan Garcia attended both an inauguration day Mass celebrated by Lima Cardinal Juan Cipriani Thorne and an evangelical service.

Do these events signal a trend toward greater secularism in what has traditionally been seen as the world’s most Catholic continent?

In 1995, 80 percent of Latin Americans identified themselves as Catholic, but by 2004 that figure had dropped to 71 percent, according to the Chile-based Latinobarometro polling firm. Only 42 percent of Catholics considered themselves practicing, however, compared to more than 74 percent of evangelicals.

“It’s pretty evident that the church is going through a long period of disengagement” compared to the close church-state relationship that existed in colonial times, said Jesuit Father Jeffrey Klaiber, a historian at the Pontifical Catholic University in Lima.

Father Klaiber said the strength of the region’s Catholicism has always been somewhat exaggerated. The church was always weaker than it appeared, “even in colonial times, but people didn’t realize it, because of its dependence on the state,” he said. “People were there not so much for the church, but for the devotions.”

Religious devotions such as those to Our Lady of Guadalupe in Mexico and the Lord of the Miracles in Peru are celebrated by Latin Americans around the world.

In Argentina, where the disengagement of church and state dates back to the 1850s, only 34 percent of people identify themselves as Catholic, according to Latinobarometro. In Chile, which legalized divorce in December 2004 over the protests of the Catholic bishops, the figure is 31 percent.

But while people may be less willing to follow their bishops’ lead on issues such as divorce or birth control, the church still “has the power to call people together in a crisis. And people still look to the church to have a voice” on social justice issues, Father Klaiber said.

Although many of the bishops who spoke out most strongly on those issues in recent decades have retired, the church’s defense of human rights and social justice continues to give it great credibility in the region, according to Dominican Father Edward Cleary, who heads the Latin American studies department at Providence College in Rhode Island.

The commitment to human rights and social justice is evident from a glance at the messages posted in recent years on the Web pages of the region’s conferences of bishops, Father Cleary said.

In pastoral letters, many conferences have called for clean elections, an end to corruption and greater government attention to issues such as health care and education. In countries such as Bolivia, Peru and the Dominican Republic, church leaders have mediated in political crises. And while only 27 percent of Latin Americans say they trust their countries’ legislatures and 36 percent trust the courts, 71 percent trust the church, according to Latinobarometro.

In Central America, “the residual influence of (Archbishop Oscar) Romero and others in El Salvador is still evident,” Father Cleary said. Indeed, Central America has the highest proportion of Catholics – 48 percent – who say they practice their faith, according to Latinobarometro.

Although secularism seems to be creeping into “the Catholic continent,” religion continues to permeate politics.

In Mexico, after Felipe Calderon defeated Andres Manuel Lopez Obrador by a scant 250,000 votes in the July 2006 presidential election, Lopez Obrador’s supporters staged roadblocks in an effort to pressure for a recount – a move the conference of bishops compared to terrorist actions.
Ecuador’s new president, Rafael Correa, made no secret during the campaign of his history of church-related social action, while his opponent, banana magnate Alvaro Noboa, styled himself as “God’s candidate.”

In Argentina’s northern Misiones province, a coalition led by retired Bishop Joaquin Pina Batllevell of Puerto Iguazu dealt the governing party an unexpected defeat in an October 2006 election of delegates to a constitutional convention. Bishop Pina had spoken out against the incumbent governor’s efforts to change the constitution so he could stay in power.

In nearby Paraguay, retired Bishop Fernando Lugo Mendez of San Pedro earned a warning from the Vatican when he announced in December that he would run in the 2008 presidential elections. Polls give him a slight edge.

Whether or not a country’s bishops take a strong stand on particular issues, many committed Catholics play a significant role in political and social affairs, Father Cleary said. Many members of Morales’ government have worked in diocesan social ministry programs in Bolivia, while in neighboring Peru, several members of the Truth and Reconciliation Commission that investigated two decades of political violence were active Catholics.

With seminary enrollment up, about 175,000 religious and more than 1 million lay catechists, “to me it looks like the church (in Latin America) is doing better than in the United States in terms of work force, confidence and missionary spirit,” Father Cleary said. “How can there be 1.1 million lay catechists if there’s not a commitment?”