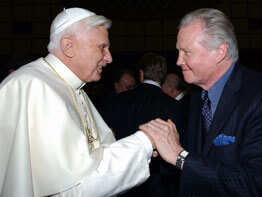 JERUSALEM – Academy Award-winning actor Jon Voight said the strong Catholic roots instilled in him by his mother have helped him overlook much of the “nonsense” of Hollywood.

“It is a relief in Hollywood to have some spirituality,” Mr. Voight told Catholic News Service in mid-May in the lounge of a hotel on the edge of Jerusalem’s Old City. “You are protected from all the nonsense. You keep your spirituality by doing good deeds.”

After a period of spiritual-seeking in the mid-1980s, Mr. Voight said, he rediscovered the lessons learned as a young child from his mother and became involved in using his celebrity status to help others, including American Indians, drug addicts, the homeless, Vietnam veterans and farmers. He also has been a spokesman for almost 20 years for Chabad’s Children of Chernobyl, a medical relief program for Russian Jewish children still affected by the fallout from the 1986 explosion of the nuclear reactor in Chernobyl, Ukraine.

Mr. Voight was in Israel to show his support for the Chernobyl children’s program.

The actor, who is known for his role in “Midnight Cowboy” and his Oscar-winning role in “Coming Home,” also has portrayed the older Pope John Paul II in a televised miniseries. He is also the estranged father of actress Angelina Jolie.

In addition to meeting children from Chernobyl who were brought to Israel with the help of the medical relief program, the 69-year-old actor spent a day in the southern Israeli city of Sderot and met with Israeli terrorism victims and their families. Sderot has been facing daily missile launches from the Gaza Strip.

“It made me so upset” to see the children in Sderot, he said.

“The press does not give it any attention,” he said. “The most important thing is: I am here to try to figure out a way to bring recognition to these people who are surrounded by (other) people who want to bring (about) their destruction.”

In May, Palestinian militants lobbed hundreds of missiles into southern Israeli communities, and at least two Israelis were killed. Israel retaliated, and a Palestinian mother was killed.

“People in the United States can’t even get our minds around it, it is so horrific and despicable: putting your own family’s life on the line and using it for gain for your cause,” Mr. Voight said.

He said he seeks out knowledge about other religions because “holy people are holy people,” regardless of their religion.

“I try to surround myself with holy people wherever they come from,” he said.

Mr. Voight has said Pope John Paul, author and Holocaust survivor Elie Weisel and the Dalai Lama were the few moral voices that could be counted on.

“It was great to be able to play someone I loved so much,” Mr. Voight said. “I was very happy to do it. He was a great man.”

Mr. Voight spontaneously began imitating the pontiff, quoting from a papal speech at the 2002 peace meeting in Assisi, Italy, that was left out of the television movie.

“I am ready to acknowledge that Catholics have not always been faithful to this affirmation of faith,” Mr. Voight said, imitating Pope John Paul’s accent and cadence, holding up his hand for emphasis.

The pope, said Mr. Voight, fulfilled his personal definition of what it takes to be a great person: someone who brings other people together, no matter what the religion or title, and seeks justice and is a spiritual being.

He said his mother in Yonkers, N.Y., was a true example of that.

“She was a very Catholic woman and she went to Mass more than one time a week, but she never talked about it. We never knew when she went. It was very private,” he said. “I felt guilty thinking she was only taking care of us when she could be running a hospital. She could have been (legendary Israeli Prime Minister) Golda Meir.”