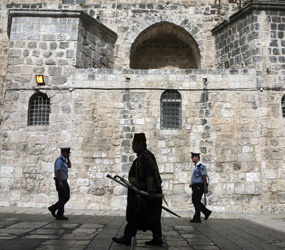 JERUSALEM – Pope Benedict XVI’s eight-day visit to the Holy Land was a biblical pilgrimage, an interfaith mission and a political balancing act all rolled into one.

It was also a gamble. In a region hardened by decades of conflict and simmering social and religious tensions, there was no guarantee of success.

The long-range verdict is yet to come on this “pilgrimage of peace,” but the pope certainly delivered a clear and challenging message to his diverse audiences in Jordan, Israel and the Palestinian territories May 8-15. That alone was an achievement.

The common theme that tied his events together was that God acts in human events, and that believers have a duty to make religion an effective force for good in a region suffering from war, mistrust and misunderstanding.

To Christians, the pope focused on the hope brought by the death and resurrection of Jesus Christ. On his final day in Jerusalem, he summed up his message, saying that the empty tomb “assures us that God can make all things new,” that peace is really possible and that long-standing hostilities can be overcome.

That was the point of the pope’s pilgrimage to places like the Jordan River, the Grotto of the Annunciation and Golgotha. He was not just engaging in religious tourism, but trying to strengthen the confidence of the struggling Christian community in the Holy Land and the faith of other Christians who watched and listened from afar.

His blessing of new construction sites for churches and a Catholic university in Jordan underscored his point that even as a tiny minority the church can have a significant and positive impact on society.

On an interreligious level, the pope’s pilgrimage seemed to have two distinct phases. In Jordan, a predominantly Muslim country that has protected the rights of Christians, the pope lauded efforts to build an “alliance of civilizations” and curb extremism. His stop at a mosque in Amman was historic – he’s now the first pope to have visited two Muslim places of worship.

At the same time, the pope was not in Jordan simply to bless official efforts at dialogue. His aim was to reach a wider audience and provoke some thinking. His speech to Muslim leaders in Amman thus returned to the theme of faith and reason, which caused such controversy at Regensburg, Germany, in 2006; this time, he chose his words carefully, but continued to insist that religion detached from reason is susceptible to “ideological manipulation” that can provoke tensions and violence in society.

His approach was to build bridges by affirming the moderate voices in Islam. When he spoke, for example, of the “fundamental contradiction of resorting to violence or exclusion in the name of God,” he cited Muslim messages from recent years.

For most people, of course, papal visits work on a less intellectual level. The pope may have won the most friends in Jordan simply by wearing on his shoulders a Jordanian kaffiyeh or “shmagh,” a red-and-white-checked head scarf that for many people has political overtones.

When the pope landed in Israel May 11, the interreligious dimension of his trip suddenly got complicated. He began by honoring the memory of the 6 million Jews killed in the Holocaust and denouncing anti-Semitism. The same day he paid a visit to the Yad Vashem Holocaust memorial, where he met with six Holocaust survivors and spoke movingly of the tragedy of the victims.

All this was designed to re-establish Pope Benedict as a friend of Judaism and the Jews. But the reviews were mixed, mainly because the pope, a native of Germany who lived under the Nazi regime, did not speak at the memorial about the perpetrators of the Holocaust.

Vatican officials pointed out that the pope has spoken on several previous occasions about the Nazi crimes against humanity. That may be true, but Yad Vashem illustrated that Pope Benedict’s reserved style and his reluctance to share publicly his own personal experiences can sometimes deflate an otherwise emotional moment.

The pope’s interreligious dialogue encounter the same evening was unfortunately derailed by a Muslim sheik’s denunciation of Israeli policies, which prompted Jewish representatives to walk out. And with that, the pope was knee-deep in the politics of the region.

The Israeli-Palestinian conflict touches every aspect of life in the Holy Land, so it should have been no surprise that the pope got an earful wherever he went. Especially in the West Bank city of Bethlehem, on his one full day in Palestinian territory, speaker after speaker – including church leaders – denounced the Israeli occupation, the travel and economic restrictions, the destruction of homes and the political detainees.

The pope walked a finer line. On one hand he sympathized with Palestinians and strongly defended their right to an independent state; on the other hand, he spoke of “turmoil” rather than “occupation” and appealed to Palestinian youths to overcome bitterness and reject terrorism – words that Israeli officials were no doubt happy to hear.

He denounced the 26-foot-high Israeli security wall that cuts through the West Bank like a concrete scar, calling it one of the “saddest sights” of his visit and a tragic symbol of Israeli-Palestinian relations. But even here, he was careful to avoid blame, referring to “the hostilities that have caused this wall to be built” rather than the “oppression” that his Palestinian hosts loudly condemned.

The pope’s method was the moral prodding of a pilgrim. When he met with Israeli President Shimon Peres, for example, he explored the Hebrew scriptural meaning of “security” as not just the lack of threat but the building of trust.

The pope did more than preach in the Holy Land. He also did a lot of listening, his aides said. For every papal speech, there were three or four speeches from his hosts.

“I think that gave him a much deeper knowledge of the situation and problems of the Holy Land and the Middle East,” said the Vatican spokesman, Jesuit Father Federico Lombardi.

Of the visit’s many remarkable moments, one stood out: At an interfaith encounter in Nazareth, the pope and other Christian, Muslim, Jewish and Druze leaders held hands in prayer as a psalm of peace was sung – a small but significant achievement on his pilgrim’s path.