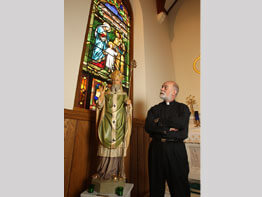 Father William J. O’Brien III knows every minute crack in the wall, every burned-out light bulb and every fading panel on the vivid stained-glass windows of his stunning church.

The pastor sees nothing but sheer beauty, however, as St. Patrick, Havre de Grace, celebrates the 100th anniversary of the building on Congress Avenue, mere blocks from the Chesapeake Bay.

The neo-gothic structure, the third home for the 161-year old parish, will mark its centennial with a rededication Mass June 29 at 3 p.m., followed by a reception.

Father O’Brien isn’t the only person in love with the church, built in 1908 for a little more than $51,000. Parishioners old and new are awe-struck by the European-influenced building, which seats slightly more than 200 people in any one of its four weekend Masses.

Michael Hayes and his wife relocated to the area in 2006 and were looking for a parish when he attended a Mass at St. Patrick.

“I was immediately taken with the church itself, the stained-glass windows and Father O’Brien,” Mr. Hayes said.

He and his wife became parishioners, and Mr. Hayes, who has a background in photography, was inspired to take numerous images of the windows over the last year.

Mr. Hayes joined the parish just as the stained-glass windows were being thoroughly repaired. The repair bill for the time-ravaged windows was close to $100,000.

“With the colors, we saw things in the windows that we never saw before,” the church’s music director, Richard Allen said.

Since the rededication of the building’s cornerstone in August 2007, the church has been reflecting on its past and looking toward the future. That 1908 cornerstone was laid down by the parish’s pastor at the time, Father James Fitzgerald, who had a stone mason background. The pastor provided a sturdy foundation that lasts to this day.

“He built it in a very literal sense,” Father O’Brien said. “He had that talent, that ability.”

In the past 100 years, the church has grown to take over the whole block between North Stokes Street and Congress Avenue. St. Patrick Hall, which holds 400 people, and the former St. Patrick school building are also located on the block.

The parish could use the room.

The impending influx of people under the Base Realignment and Closure (BRAC) plan at Aberdeen Proving Ground will dramatically impact Harford County and its local churches as the decade draws to a close.

Father O’Brien, in his ninth year at the parish, knows a new wave is on the way, he just doesn’t know how many will arrive in Havre de Grace, and how he can best serve them. The spacious St. Patrick Hall could, for now, be the answer for additional Masses in a parish that already has more than 1,000 families.

Father O’Brien said his parishioners are ready for the next century, no matter what happens.

“If that building collapsed tomorrow, it would be a tragedy,” Father O’Brien said of his church, “but the parish would still be here. There’s a big distinction. We celebrate 100 years in this building, but we’re also celebrating that this is a parish that has a lot of life to it – a lot potential.”