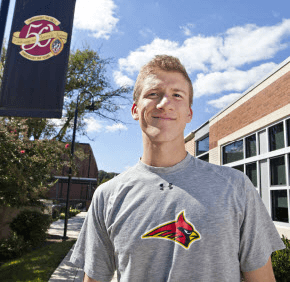 Loyola Magazine recently published an article about Grace McComas, the daughter of Christine Pfister McComas, ’87 and David McComas, ’85, who committed suicide last Easter after she was cyberbullied.

Father Joseph Breighner, a regular columnist with the Catholic Review, also wrote about the family.

Below are the first few paragraphs of Grace’s story, with a link to view the full article.

Grace McComas doesn’t want you to be sad for her.

Her mom, Christine Pfister McComas, ’87, will tell you the same thing. The third of Christine and husband David’s (’85) four boisterous daughters, 15-year-old Grace was a happy, bubbly kid since birth, gifted with the perfect combination of a contagious sense of humor and the unbreakable ties of a loving family at home under a warm, inviting roof in Woodbine, Md. Grace occupied her evenings with the activities of a typical teenager: homework, TV, texting with friends.

But Grace’s selflessness was unwavering. Those closest to her say above all it’s what defined her – putting others first.

And that’s why she doesn’t want you to be sad for her. It’s hard to believe anyone would mistreat such a tenderhearted person, but someone did. Call it harassment. Call it bullying. Call it cruelty. It was all of those things, and it was too much to bear.

Grace McComas took her own life on Easter Sunday, 2012. She was the victim of a bully who began his crusade in the digital realm and watched it spread like wildfire.

The world stopped for Christine, David, and their family. Their light was gone, the love they built irreversibly crushed.