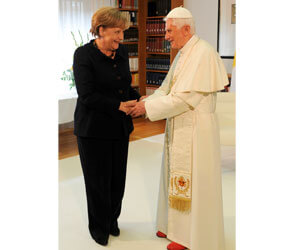 BERLIN – Arriving in Germany for a four-day visit, Pope Benedict XVI strongly defended the church’s voice in public affairs and said that to dismiss religious values as irrelevant would “dismember our culture.”

In a major address to the German parliament Sept. 22, the pope said belief in God was the foundation for Western progress in law and social justice through the centuries.

“The conviction that there is a creator God is what gave rise to the idea of human rights, the idea of the equality of all people before the law, the recognition of the inviolability of human dignity in every single person and the awareness of people’s responsibility for their actions,” he said.

It was the German pontiff’s third trip as pope to his homeland, and in many ways the most challenging. Germany is considered one of the most secularized countries in Europe, and the Catholic Church in German has been strained by contentious internal debates.

Answering questions from reporters on his flight from Rome, the pope said he recognized that increasing numbers of Catholics in Germany were leaving the church. Some, he said, were motivated by recent revelations of “terrible” scandals, a reference to priestly sex abuse cases that have come to light over the past two years.

The pope said he could understand their feelings. But he said that if they accept the church as the “people of God,” and not as a typical social organization, Catholics should “withstand and work against these scandals, precisely because they are on the inside.”

When the pope stepped off his plane in Berlin, the German capital, he was greeted by President Christian Wulff and Chancellor Angela Merkel. The pope smiled as a boy and a girl presented him with a bouquet of flowers.

A small group of Catholics cheered on the edge of the tarmac, and cannons boomed out a 21-gun salute.

At a welcoming ceremony at Bellevue Palace, the presidential residence, the pope was applauded by nearly 1,000 civil dignitaries and ecclesiastical leaders. In a speech, he said he had come to Germany primarily “to meet people and to speak about God.”

He warned that religious indifference was leading people to focus on individualistic and materialistic goals, losing sight of their “responsibility before God and before one another.”

The world needs “a profound cultural renewal and the rediscovery of fundamental values upon which to build a better future,” he said.

In his own speech to the pope, Wulff, 52, said that although the church’s message is not always an easy one, it is needed in modern society. The recent economic crisis has left many Germans searching for meaning in their lives, he said, and the church is in a position to offer answers.

Wulff, a Catholic, is divorced and civilly remarried. He had told newspapers that he would ask the pope to be more understanding toward people in that situation.

In his address to the Bundestag, the lower house of the German parliament, Pope Benedict offered a classic defense of Christianity as a protector and promoter of the concept of social justice. Justice means knowing and doing what is right, he said, and Germany’s Nazi past illustrates that without justice, the state becomes “a highly organized band of robbers, capable of threatening the whole world and driving it to the edge of the abyss.”

Today, he said, when man has acquired previously inconceivable power, the threat is even more dramatic.

“Man can destroy the world. He can manipulate himself. He can, so to speak, make human beings and he can deny them their humanity,” he said.

The pope cautioned that while majority rule works for many political matters, it is not enough when fundamental issues of human dignity are at stake. In that context, he noted that Christian resistance to certain legal systems has a strong tradition, including the resistance movements against the Nazi and other totalitarian regimes.

In general, he said, Christianity has always tried to help people recognize what is right, not by proposing a revealed body of law to the state, but by pointing to nature and reason as the true sources of law – rooted in the “creative reason of God.”

The danger today is that ethics and religion are considered “subjective” and no longer valid, overshadowed by a “purely functional” concept of nature as explained by natural sciences, he said. This has cut Europe off from the sources its own culture, he said.

The pope said the ecological movement in Germany reflected an awareness, especially among young people, that “something is wrong with our relationship with nature.” He said there is also need for an “ecology of man” that recognizes that the nature of the human being must be respected and cannot be manipulated at will, and that “man does not create himself.”

It was the first time Pope Benedict addressed a parliamentary body, and the speech was boycotted by dozens of lawmakers who said it violated the separation of church and state. The empty seats were apparent when the pope entered the hall of the historic Reichstag building to a standing ovation.

During his news conference with reporters on the flight from Rome, the pope said such opposition was legitimate in a democratic society, as long as it was expressed in a civil manner.

Elsewhere in Berlin, protesters gathered to demonstrate against the papal visit and the church’s teachings on homosexuality, abortion and birth control, as well as the church’s record on clerical sex abuse.

The pope met privately with Merkel, and she said afterward they discussed the financial markets and the duty of politicians to ensure the markets work for the common good.