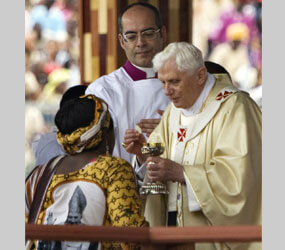 YAOUNDE, Cameroon – Celebrating Mass with more than 40,000 Catholics in Cameroon, Pope Benedict XVI urged African families to reject the “tyranny of materialism” and other social changes that risk eroding the continent’s traditional values.

“Brothers and sisters in Cameroon and throughout Africa, you who have received from God so many human virtues, take care of your souls! Do not let yourselves be captivated by selfish illusions and false ideals!” the pope said in a homily March 19 at the Amadou Ahidjo soccer stadium in Yaounde.

The Mass marked the publication of the working document for October’s Synod of Bishops for Africa, and at the end of the liturgy the pope personally handed copies of the text to bishops from all over the continent.

Wearing gold vestments, the 81-year-old pope celebrated Mass on a hut-shaped altar erected at one end of the playing field. The liturgy used eight languages, including Cameroon’s native Ewondo language, and featured African songs backed by the distinctive notes of wooden balaphons.

In a greeting, Archbishop Simon Tonye Bakot of Yaounde explained that Africans treat the “Mvamba,” or grandfather, with immense respect, and that they welcomed the pontiff as the “great Mvamba.”

The pope delivered his sermon emphatically, speaking in French and English. He said it was essential for African mothers and fathers to pass on to their children the human and spiritual values of the past, beginning with belief in God.

But social changes, including a growing generation gap and a sense of uprootedness on the continent, have made this difficult today, he said.

“At a time when so many people have no qualms about trying to impose the tyranny of materialism, with scant concern for the most deprived, you must be very careful. Africa in general, and Cameroon in particular, place themselves at risk if they do not recognize the true author of life!” he said.

The pope said traditional values have also been overturned by a rural exodus and urbanization that have broken family ties and left many younger people alone, unemployed and disoriented. Africans in general have left the land, physically and morally, resulting in a kind of “interior exile” that alienates them from God and themselves, he said.

“Is this an irresistible development? By no means!” the pope said. He said the church is ready to bring spiritual and material help to suffering people of the continent.

“The first priority will consist in restoring a sense of the acceptance of life as a gift from God,” he said. Every “tiny person, however weak,” is created in God’s image, he said, adding: “Every person must live! Death must not prevail over life!”

The pope held out St. Joseph, whose feast day was celebrated the same day, as a model for husbands and fathers in Africa. He made a special plea for husbands to treat their wives with respect and love, as St. Joseph treated Mary. It is a sensitive topic in Africa, where in many places wives are still considered the property of their husbands and subservient to them.

The pope also offered special words to young Africans, asking them to allow Christ into their lives and, if they feel called, to enter the “supreme service” of the priesthood or consecrated life.

“To the children who no longer have a father, or who live abandoned in the poverty of the streets, to those forcibly separated from their parents, to the maltreated and abused, to those constrained to join paramilitary forces that are terrorizing some countries, I would like to say: God loves you, he has not forgotten you and St. Joseph protects you!” he said, as the crowd burst into applause.

The papal Mass was the pope’s biggest liturgical event in Cameroon, and was broadcast on national television. President Paul Biya, a Catholic, sat near the altar with other leading government officials.

At the end of the liturgy, the pope handed out the 60-page working document for the Oct. 4-25 Synod of Bishops for Africa. The text called on Catholics to help end the rampant injustice that fuels conflicts on the continent and usher in an era of peace. It said the synod would examine ways to better prepare the faithful in Africa for a more visible and active role in promoting unity both in the church and society.

The document said globalization “infringes on Africa’s rights” and tends “to be the vehicle for the domination of a single, cultural model and a culture of death.” But it also pinned the blame for many of Africa’s ills on the evil in people’s hearts, which makes them thirsty for riches, power or revenge.

Later in the day, the pope was scheduled to visit a church-run center for the sick and disabled, and then talk with a group of African bishops in greater detail about the themes of the upcoming synod.