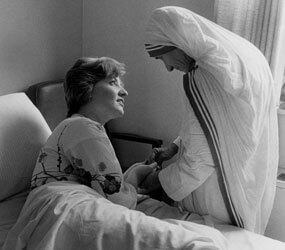 WASHINGTON – Thirteen years after her death, the impact of Blessed Teresa of Calcutta’s work and prayer is still felt around the world.

Mother Teresa would have turned 100 Aug. 26. The order she started 60 years ago – the Missionaries of Charity – continues its outreach to the “poorest of the poor.” Her spiritual life also continues to gain attention as her sainthood cause progresses.

Many say Mother Teresa’s legacy is the combination of her extreme devotion to the poor and her spirituality since both were so deeply intertwined.

For young people, the nun is a model for how to live out one’s faith.

“What strikes them is that she practiced what she preached,” said Eileen Burke-Sullivan, an associate professor of theology at Jesuit-run Creighton University in Omaha, Neb.

She said students connect with Mother Teresa because they grew up seeing her image on television or in the newspaper and they knew she “lived and died working for poor.”

Burke-Sullivan told Catholic News Service that students appreciate how Mother Teresa made that connection between the practice of faith and justice.

Students at Benedictine College in Atchison, Kan., have a vivid reminder of the founder of the Missionaries of Charity in the school’s Mother Teresa Center for Nursing and Health Education to be dedicated Aug. 26 as part of the college’s new nursing program.

Stephen Minnis, president of Benedictine College, said school officials searching for a name for their new nursing center kept talking about Mother Teresa even though she wasn’t a nurse.

“Who is a better caregiver than Mother Teresa,” he said, adding that she is a “wonderful example” for students and hopes they will be inspired by her quote displayed at the building’s entrance: “Give your hands to serve and your heart to love.”

David Gentry-Akin, a theology professor at St. Mary’s College of California in Moraga, said for all the accolades about Mother Teresa, she also received a fair amount of criticism. Although many thought her work was noble, they also wanted her to do more to “change the system” and some in the church thought she was too traditional.

But as he sees it, the nun’s enduring legacy is her spirituality. “The work she did is phenomenal,” he said, adding that it was more effective because it was “motivated out of deep faith and holiness.”

Gentry-Akin said a telling feature of Mother Teresa’s spirituality is revealed in a prayer she is said to have prayed each day asking God’s light to shine through her so that those she came in contact with would “see no longer me but only Jesus.”

The prayer’s imagery serves as title for a book of her writings published in 2007: “Mother Teresa: Come Be My Light.” It describes, in her own words, the crises of faith she experienced and how she often felt that God had abandoned her.

After its publication, some said the revelations made Mother Teresa seem less genuine, but Gentry-Akin said it only made her more inspirational.

“The fact that she could go through that and remain faithful makes her sanctity all the greater,” he said.

Margaret Thompson, a history professor at Syracuse University, said: “We are only now beginning to learn how complex she really was, and as historians we’re not ready to issue final word on her.”

Thompson finds irony in those who dismissed Mother Teresa for being too traditional, saying she was initially viewed as controversial when she left her religious order to start her own order and walked through impoverished neighborhoods in India wearing a sari.

She said Mother Teresa’s work was not about making good impressions but meeting the needs of people wherever they were.

Five years after her death, the Vatican began the process of beatification for the woman often described as a “living saint.” In 2002, the Vatican recognized one miracle attributed to her intercession. Her canonization is currently awaiting proof of a second miracle.

A sister at Queen of Peace, the North American motherhouse for the Missionaries of Charity in the New York City borough of the Bronx, told CNS that there is no shortage of miracles attributed to Mother Teresa. The sister, who did not want to be identified, said she spent a year in Calcutta working on the nun’s sainthood cause and spent three days simply entering miracles into the computer that people attributed to Mother Teresa’s intercession.

The sister said she’s convinced the order continues its work through her prayers.

“We constantly feel her spirit,” she said.

Contributing to this story was Chaz Muth.