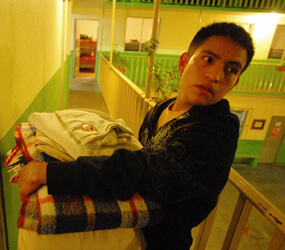 VATICAN CITY – People should not look upon immigrants as problems, but as fellow brothers and sisters who can be valuable contributors to society, Pope Benedict XVI said.

The migration of peoples represents a chance “to highlight the unity of the human family and the value of welcoming, hospitality and love for one’s neighbor,” he said Nov. 9.

The pope spoke during an audience with participants of the Sixth World Congress on the Pastoral Care of Migrants and Refugees taking place Nov. 9-12 at the Vatican.

The pope underlined the dramatic difficulties many migrants face in their efforts to survive or improve living conditions for themselves and their families.

“The economic crisis, with the enormous growth in unemployment, diminishes the possibilities of employment and increases the number of those who aren’t able to find even unsteady work,” he said.

The economic divide between industrialized and poor countries continues to grow, he said, and many people have no choice but to leave their homeland in search of a living – even if it means accepting inhuman working conditions and experiencing great difficulties fitting in someplace new with different language, culture and rules.

Many immigrants today are fleeing “humanly unacceptable” living conditions, but they are not finding “the reception they hoped for elsewhere,” said the pope.

Globalization means that working for the common good must extend beyond national borders, he said. True development comes through solidarity, addressing the unequal distribution of the world’s resources, “dialogue between cultures and respect for legitimate differences,” he said.

The pope said today’s phenomenon of world migration can offer that needed opportunity to meet new cultures, foster understanding between peoples, build peace and promote development that benefits all nations.

Christians must be open to listening to the word of God who calls people to imitate Christ in caring for others and to “never be tempted to despise and reject people who are different,” he said.

Conforming one’s life to Christ’s means seeing every man and woman as a brother or sister, children of the one God, he said.

This sense of brotherhood leads to being caring and hospitable toward others, especially those in need, he said.

“Every Christian community that is faithful to Jesus’ teachings cannot but feel respect and concern for all people … especially for those who find themselves in difficulty,” he said.

“This is why the church invites all Christians to open their hearts to migrants and their families knowing that they are not just a ‘problem,’ but are a ‘resource’ ” that can contribute to true development and the good of all people, he said.